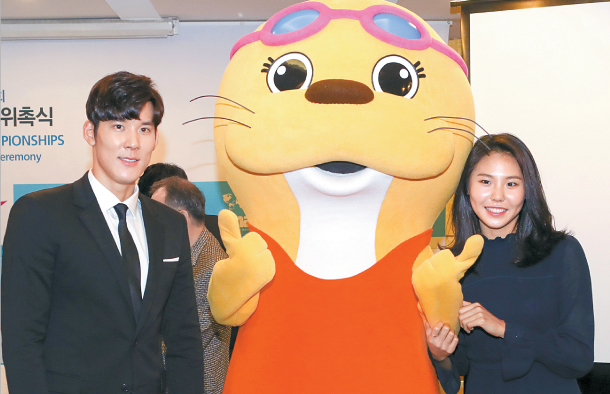 From left, Park Tae-hwan, 2019 FINA World Championships mascot Dari and An Se-hyeon pose at a promotional ceremony on September 6, 2017. [ORGANISING COMMITTEE FOR GWANGJU 2019]

In less than a year, Gwangju will play host to one of the world’s biggest water sports competitions, the 2019 World Aquatics Championships.

This will be the first time the biennial aquatics event will be hosted in Korea and the third time it will be hosted in Asia. From July 12 to August 18, nearly 15,000 athletes from more than 200 countries will visit the southeastern part of the country to compete. The FINA Championships, an international competition featuring the world’s top athletes, will be held from July 12 to 28, while the FINA Masters Championships, a competition between swimming clubs, will take place from August 5 to 18.

Six aquatic sports — swimming, diving, high diving, open water swimming, synchronized swimming and water polo — will be contested over 76 events during the Championships, while only five sports (excluding high diving) will be in competition during the Masters Championships.

“As Gwangju hosts the FINA Championship in 2019, Korea will become the fourth country to have hosted five international mega-sports events,” Yoon Jang-hyun, former mayor of Gwangju, was quoted as saying in an article posted on the FINA website. “As an experienced global host of major events, I am proud to say that our city and our citizens are looking forward to welcoming the FINA World Championships in 2019 and we are devoted to making them a great success.”

The world’s biggest aquatic event, the FINA World Championship is considered one of the five mega-sports events, along with the Summer & Winter Olympics, the FIFA World Cup and the International Association of Athletics Federations (IAAF) World Championships. Next summer, Korea will become the fourth country — after Germany, Italy and Japan — to have hosted all five major sporting events.

The FINA World Championships was first held in 1973 at Belgrade, Yugoslavia and from 1978 to 1998, the event was held every four years. However, since 2001, the World Championships has been held every two years. In the all-time medal standings, the United States has a dominant lead with a total of 586 medals, followed by China at 296 and Russia at 210. Korea has won a total of three medals throughout the FINA Championships — two golds and one bronze.

“On behalf of the Organising Committee of the 18th FINA World Championships, we are very much looking forward to welcoming the athletes, officials, fans and especially our friends in the media to Gwangju next year,” Cho Young-teck, Vice President and Secretary-General of the Organising Committee for Gwangju 2019, was quoted as saying on the FINA website. “Our team is working hard to ensure a fantastic event and make it an unforgettable experience for all.”