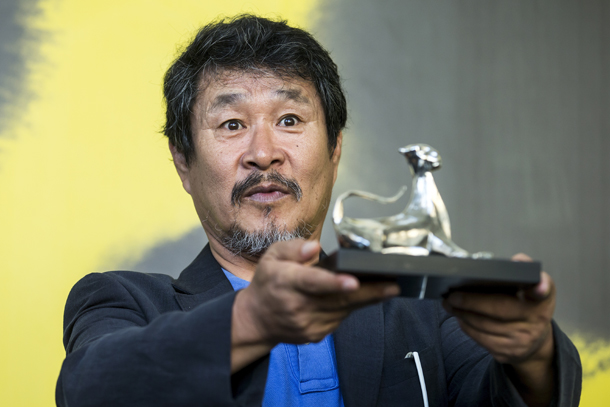 The coveted top prize at the festival, which wrapped on Saturday, local time, went to director Yeo Siew Hua’s “A Land Imagined,” which follows a lonely Chinese construction worker who goes missing in Singapore.

Ki’s achievement marks the second time a Korean actor has won the Best Actor award, following Jung Jae-young, who won for his role in “Right Now, Wrong Them” (2015), which was also directed by Hong.

In “Hotel by the River,” which was the only Korean film invited to compete in the Locarno festival, Ki plays a poet who is convinced that he is about to die. The movie co-stars Hong’s regular muse Kim Min-hee, who plays a heartbroken woman who just went through a painful breakup. The story develops as the two check into the same hotel.

A local release date for Hong’s latest directing effort has not been confirmed.

Meanwhile, Ki also received attention on the local cinema scene for his role in the espionage flick “The Spy Gone North,” in which he makes a strong impact playing North Korea’s late leader Kim Jong-il.