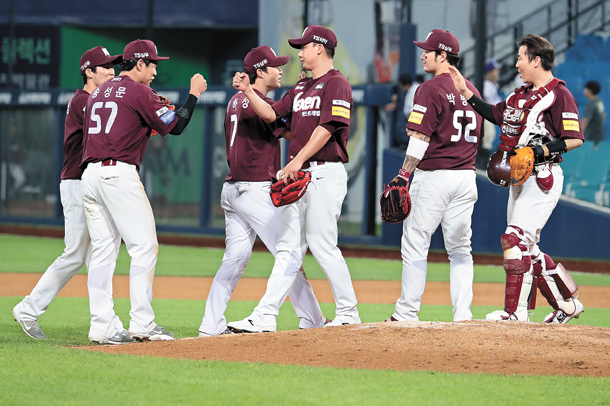 The Nexen Heroes have proven unstoppable in the second half of the season, and behind that success is the return of Lee Jung-hoo.

The 2017 Rookie of the Year got off to a rough start this season due to injuries. Lee was excluded from the Heroes’ entry twice earlier in the season due to calf and shoulder injuries. Due to his struggle at the beginning of the season, he missed out on his spot in the Korean national team for the 2018 Asian Games.

“Rather than disappointment, I only thought about playing better because[, at the time,] I was injured and my statistics weren’t that great,” Lee said.

His return to the team on July 19 has proven once and for all that there is no such thing as a sophomore jinx. As of Tuesday’s game, Lee is the league’s new leader in batting average, at .375. Lee took the throne from the Doosan Bears’ Yang Eui-ji, who has held it for most of the season. If Lee holds the spot until the end of the season then he and his father, Lee Jong-beom, will become the league’s first father-son duo to both win the batting title.

“I’m not thinking about the title yet,” Lee Jung-hoo said. “There are still a lot of games left to play. Since we’re competing for the postseason spot, I’ve only been focusing on trying my best in each game. This led to good results.”

Lee has also proven how crucial he is to the Heroes. While Lee was excluded from the entry, the Heroes barely held the wild card spot in fifth. However, once Lee returned, the Heroes went on a 10-game winning streak to move into fourth place as of 6 p.m. Wednesday.

The Heroes’ winning streak has given the team room to move up one more spot, as they are only 3.5 games behind the Hanwha Eagles. As of Tuesday’s game, they’ve managed a total of 167 hits during the streak.

In August, Lee was one of the Heroes’ hottest batter in the lineup. As the team’s leadoff, he has a batting average of .537 with 17 runs and 29 hits only for the month.

“I’ve been absent due to injuries, but our manager and coaches helped me with conditioning after returning from my injury,” Lee said. “When I got cut [from the final entry,] my fans encouraged me and cheered for me. I think I’m getting good results from all the help I got from people around me.”

And his performance also gave him an opportunity to compete at the Asian Games. Sun Dong-yol, manager of the Korean national team, announced his final entry on June 12. But as a number of players have been struggling to perform and excluded from their clubs due to injury, he has announced his intention to replace some of the players.

After the reshuffle, Lee was added to the national team on Monday, after Park Kun-woo of the Bears was excluded due to a rib injury. With the addition, Lee will be competing for the senior national team for the second time, after the Asia Professional Baseball Championship last year.

“I was puzzled then happy,” Lee said. “I wasn’t [expecting it at first], but since I was playing well last week, I had some expectations.”

Along with Lee, the Heroes’ starter Choi Won-tae also got added to the national team, replacing Cha Woo-chan of the LG Twins. With the addition of the two, a total of four players on the national team play for Nexen.

“[Now,] I’m only thinking about playing my best [at the Asian Games] and winning gold,” Lee said. “If I get a chance to be assigned [as a center fielder], I’m confident that I’ll play well.”