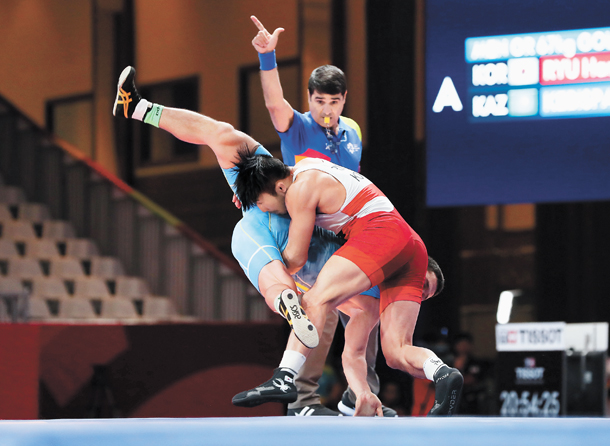 Ryu Han-su, right, competes in the men’s 67-kilogram Greco-Roman wrestling final against Almat Kebispayev of Kazakhstan at the 2018 Asian Games in Jakarta on Tuesday. [YONHAP]

Ryu defeated Almat Kebispayev of Kazakhstan, the top-ranked wrestler in the world ranking, 5-4 in the final to become the eighth Korean gold medalist at the 2018 Asian Games. Ryu defended his title from the 2014 Asian Games.

Ryu got off to a slow start in the final match, giving away the first point to Kebispayev after just 24 seconds. Despite giving up two more points to allow Kebispayev to confidently pull ahead, Ryu refused to give up and eventually managed to tie the score, earning four points for a takedown to finish the first round 4-4.

The score remained tight in the second round. With just 20 seconds, Ryu pulled ahead by two points with a takedown, enough to win the match. Kebispayev challenged the point and won, and Ryu was only awarded one point for the move. Despite the successful challenge, Ryu had still edged ahead to take gold.

“I’m very happy to have defended my title,” Ryu said. “When I first won, I played under the mindset that I had to win. But this time, I played thinking that I shouldn’t lose. And this allowed me to minimize my mistakes.”

Ryu started wrestling in seventh grade, but spent the beginning of his career as a training partner because he had started later than his peers. In addition to the tough competition amongst wrestlers, Ryu struggled with injuries. He underwent surgery on his arm in 2008 and 2010. After successfully going through rehab, Ryu finally broke onto the international scene in 2013 when he won the World Wrestling Championship.

Continuing his success, Ryu won gold at the 2014 Asian Games in Incheon. By winning gold at the 2015 Asian Championships in Doha, Qatar, Ryu set high expectations for the Rio Olympics, but failed to medal.

Though Ryu finished the quadrennial event without a medal, he quickly overcame the disappointment and won gold at the 2017 World Wrestling Championship in Paris, successfully defending his title at the Asiad.

“When my two arms were hurting, I was determined to make the most of my two quick feet,” Ryu was quoted as saying on Yonhap. “I knew I wouldn’t have an issue as long as I stuck to doing what I do best.”

Now that Ryu has successfully defended his title, he has already set another goal - to win gold at the 2020 Tokyo Olympics. As Ryu will be 32 years old by 2020, Tokyo is very likely his last chance to win an Olympic gold.

“Winning at the Asian Games is nice, but my ultimate goal is to win an Olympic gold,” Ryu was quoted as saying. “I’m afraid of suffering from physical pain during practice, but I’ll keep putting in the work so that I’ll bring home gold from the 2020 Tokyo Olympics.”

Greco-Roman events were due to continue Wednesday night, with Korea still in medal contention in a number of weight categories as of press time.