Reunions could be delayed due to typhoon

Reunions could be delayed due to typhoon 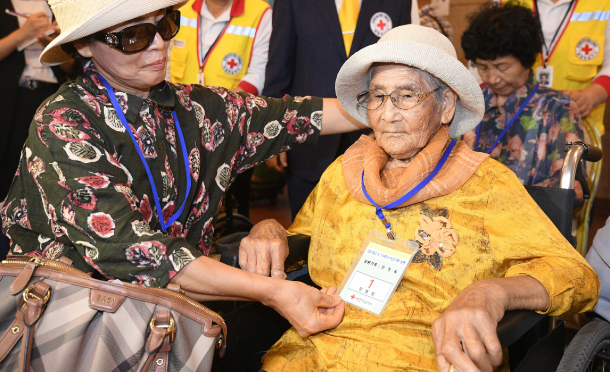 Kang Jeong-ok, 100, signs up to visit North Korea for the second inter-Korean reunion this week at the Hanwha Resort in Sokcho, Gangwon, on Thursday. [JOINT PRESS CORPS]

More than 300 South Koreans were scheduled to meet their relatives for the first time since the 1950-53 Korean War at the resort area. The Unification Ministry, which oversees inter-Korean relations, said in a statement that it was monitoring the typhoon carefully to make sure everything goes as planned. Most of the participants in the reunions are elderly.

As of press time Thursday, the schedule for the reunions remained unchanged. The South Korean delegation, which convened just south of the inter-Korean border in Sokcho, Gangwon, on Thursday afternoon, was scheduled to cross into the North together this morning and meet their North Korean relatives in the afternoon. The group is supposed to spend about 12 hours in total with their relatives at the Mount Kumgang resort before returning to Seoul on Sunday.

During a meeting with top government officials Thursday morning on possible damage due to the typhoon, President Moon Jae-in told local authorities to “swiftly review” the venue for the reunions, the schedule and other “circumstances,” if necessary.

About 330 South Koreans from 81 families gathered in Sokcho Thursday ahead of their trip to the North, along with journalists and support staff from the Korean Red Cross and government officials. The oldest South Korean was 100-year-old Kang Jeong-ok from Jeju Island, who will see her younger sister, Gang Jong-hwa, 85. According to South Korean pool reports, Kang arrived in Sokcho in a wheelchair.

“She’s extremely healthy,” said Cho Yeong-ja, 65, Kang’s daughter, who will accompany Kang to the North. “We were a little worried about the typhoon, so we flew from Jeju to Seoul a bit early on the day before yesterday. She’s a little nauseous, but her mind is perfectly fine and she’s in good shape.”

Cho said her mother insisted that she go to North Korea after she received a call from the Korean Red Cross telling her she was chosen for the second reunion. Kang Sun-yeo, 82, Kang Jeong-ok’s younger sister, who will also be at the reunion, said she wanted to tell her North Korean sister that she is glad that she is alive.

“That’s the only thing I have to say,” said Sun-yeo. “I don’t know anything else.”

The first family reunion this week lasted from Monday through Wednesday. Eighty-nine South Koreans were selected by the government to meet 185 of their North Koreans relatives. The second reunion is expected to follow a similar schedule.

The reunions are the latest follow-up to the Panmunjom Declaration, which was signed by the leaders of both Koreas on April 27 during their first summit. The last time an inter-Korean family reunion was held was in October 2015, during the former Park Geun-hye administration.