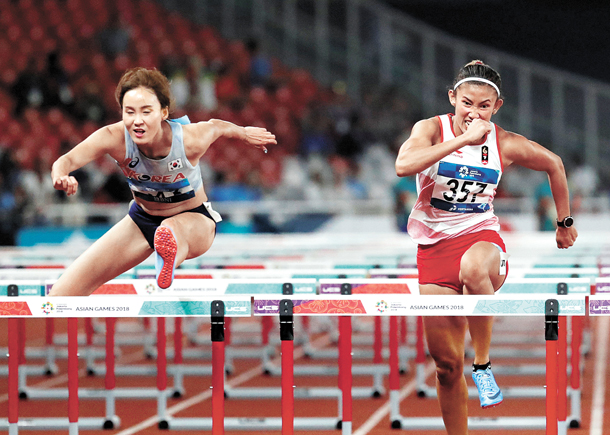 Jung Hye-lim took gold in the women’s 100-meter hurdles at the 18th Asian Games on Sunday with a time of 13.20 seconds.

From start to finish at Gelora Bung Karno (GBK) Main Stadium, Jung never gave up the lead and crossed the finish line first.

“I tried not to be nervous, but as I entered the finals, I felt more nerves,” Jung said after her race. “My time wasn’t better than what I posted in the qualifying round, but after all, it’s all about winning a medal, and I’m satisfied with my result.”

Jung became the first Korean woman to win gold in hurdles since Lee Yeon-kyung triumphed at Guangzhou 2010. Lee holds the national record in the women’s 100-meter hurdles at 13 seconds.

“Because of Lee, I was able to get this far,” she said. “I just want to think more of her today.

Jung finished fourth at the 2014 Asian Games after she failed to clear the final hurdle. She didn’t repeat the same mistake this time.

“I had a bad feeling when I jumped the last hurdle, but it wasn’t like four years ago,” she said. “I didn’t really perform well in important races. It gave me lots of regrets, but I’m happy that I won the gold medal in my last Asian Games.”

Jung is a late bloomer. It looked like her career was coming to an unremarkable end in 2016, when she was suddenly given a second chance. After being offered a spot on the Gwangju team, Jung got to train in Japan and was able to make significant improvements.

The results are easy to see. At a domestic event in June 2016, Jung came up just short of tying Lee’s Korean record, finishing at 13.04 seconds. Then, at the Kawasaki Seiko Golden Grand Prix in May, Jung set her personal best time of 13.10 seconds at an international event.

On top of a successful 2017 season, Jung won gold in women’s 100-meter hurdles at the 2018 Asian Championship in India with a time of 13.16 seconds earlier this year.

Now in her 30s, she is now one of the consistent hurdlers in Asia who finishes races in around 13.1 seconds.

“As I compete, I gained more experience,” she said. “I don’t have any fear.”

Jung said her next goal is to break the 13-second barrier.

“Honestly, I thought about retiring [after this Asian Games], but I think I will be able to compete until the 2020 Tokyo Olympics,” she said. “Until then, I’ll try to run in the 12-second range. I’ll be older in 2020, but I think there could be more good things.”