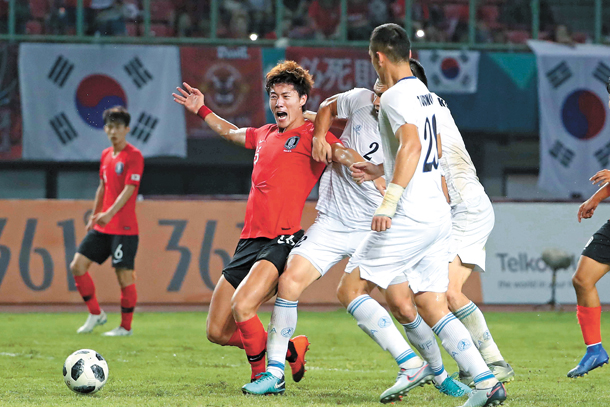 Hwang Ui-jo, second from left, trips while competing for the ball during a quarterfinal match against Uzbekistan at the 2018 Asian Games at Patriot Candrabhaga Stadium in Bekasi, Jakarta, on Monday. [YONHAP]

Facing Vietnam in the semifinals of an international competition isn’t exactly a matchup that would normally strike fear into the hearts of most professional football players, but things have changed at the 2014 Asian Games.

The U-23 Vietnamese team that Korea will play today is an entirely different beast.

Led by Korean manager Park Hang-seo, the plucky young Vietnamese squad has a real chance at disrupting the Taeguk Warriors’ bid to defend their 2014 title.

Although Park hoped not to face Korea until the finals, the two sides will play each other for a spot in the gold medal game today at Pakansari Stadium in Cibinong, west of Jakarta, Indonesia.

“I really love my country,” Park was quoted as saying on Yonhap. “But now I’m [the] head coach of the Vietnamese national team. I will show my responsibility as head coach next match.”

To get to the semifinals, the Korean men’s football team defeated Uzbekistan 4-3 in the quarterfinals at the 2018 Asian Games at Patriot Candrabhaga Stadium in Bekasi, Indonesia, on Monday.

With another hat trick, Hwang Ui-jo is the leading scorer of the tournament, with a total of eight goals at the Asian Games. He is also the first Korean ever to score two hat tricks at an international competition.

Later on Monday night, Vietnam defeated Syria 1-0, also in the second period of overtime. With the win, the young Vietnamese team will be competing in the semifinals at the Asian Games for the first time in the country’s history.

Park, who was appointed as head coach of the U-23 Vietnamese national football team in October 2017, started his tenure by leading the team to a surprise runner-up finish at the 2018 Asian Football Confederation (AFC) Under-23 Championship.

The former assistant coach of the Korean national football team at the 2002 World Cup is determined to push Vietnam even further than when he helped Korea advance to the semifinals at the World Cup.

Though Vietnam has made huge improvements under Park over the last year, Korean head coach Kim Hak-bum is also determined to defend Korea’s title.

“Whichever team becomes our opponent, we’ll prepare for the match with a beginner’s mindset,” Kim was quoted as saying. “Park really made Vietnam an interesting team. They play a very stable game. It’s going to be very interesting.”