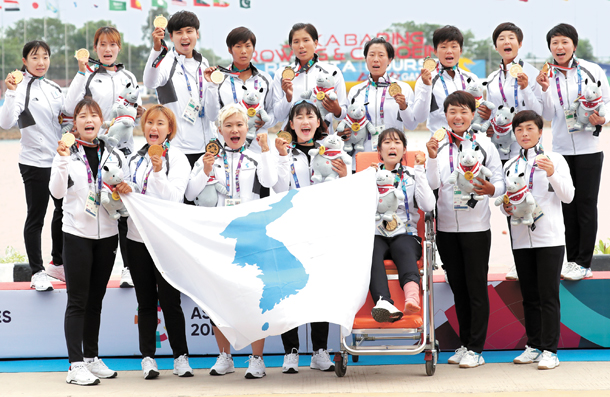 Members of the unified Korean women’s dragon boat racing team celebrate after winning gold in the women’s 500-meter race at the Asian Games in Palembang, Indonesia, on Aug. 26. [YONHAP]

Together, they were strong. The unified Korean team at the 18th Asian Games showed that it could do more than just serve as a symbol of peace and friendship - it could also win medals.

In total, Korean athletes in those sports won one gold, one silver and two bronze medals. The medals did not go to either South or North Korea in the medal standing. Instead, they were awarded to “Korea.”

This year’s Asian Games marked the first time that a unified Korean team won medals at an international multisport competition. It tied with Lebanon in 28th place among 45 participating teams on the medal table.

The women’s dragon boat racing team was the big contributor. It collected the first medal for Korea on Aug. 25 by finishing third in the 200-meter race. It then won gold in the 500-meter race the next day.

The anthem that played as the team stood atop the podium: “Arirang,” a Korean folk song that has served as the unofficial anthem for both countries. It was a historic moment.

The unified team won gold medals in the women’s team event at the 1991 World Table Tennis Championships and in mixed doubles at the 2018 ITTF Korea Open, but the gold by the women’s dragon boat team at the 2018 Asian Games marked the first time that the Koreas joined forces to win gold at a multisport competition.

The men’s dragon boat racing team then followed the women’s team by winning bronze in its final event, the 1,000-meter race, last Monday.

In rowing, Korea did not medal, but the partnership and teamwork was commendable. South and North Korea formed joint rowing teams in the men’s lightweight four and eight events, as well as the women’s lightweight double sculls.

In basketball, the women’s team took silver on Saturday after losing the final 71-65. The team comprised of nine South Korean and three North Korean players and only had a couple of weeks to train together, but the team still managed to advance to the final.

Following their impressive performance at the Asian Games, the Koreas are now looking to combine their abilities outside the continent. South Korea’s canoeing body said it would work with the International Canoe Federation to seek North Korea’s participation at the world championship in the United States next month.

While Korean athletes were busy competing in the games, officials from the South and North exchanged ideas on forming joint teams in other sports and international competitions.

The South’s sports minister, Do Jong-hwan, suggested to his North Korean counterpart, Kim Il-guk, that they should send joint teams to the 2020 Tokyo Olympics.

If realized, it will be the first time that the Koreas have a unified team at the Summer Olympics. South and North Korea fielded a joint women’s hockey team at the PyeongChang Winter Olympics in February.

To make it happen, the South and the North would need to work on the process right after the Asian Games to ensure a smooth process confirming entries and preparing for Olympic qualifications.