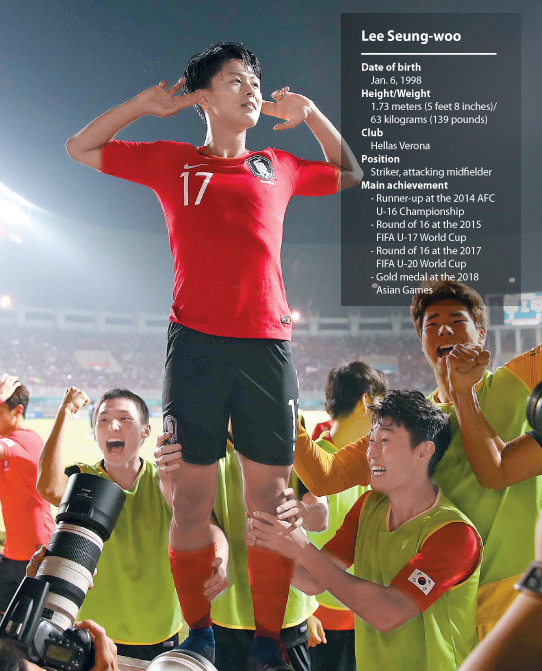 Lee Seung-woo, center, and the members of the U-23 Korean national football team celebrate after Lee scores a goal during the gold medal match against Japan at the 2018 Asian Games at Pakansari Stadium in Cibinong, Indonesia, on Sept. 1. [YONHAP]

When Lee Seung-woo joined Hellas Verona on a 1.5 million euro (1.9 billion won) four-year deal last year, it made headlines in Korea for good reason - Lee was now one of the top Korean players on the international stage.

But as Son Heung-min of Tottenham Hotspur tore his way through the English Premier League (EPL), becoming the best Asian player in EPL history, Lee was quickly forgotten. Hellas Verona struggled last season - Lee scored just one goal, and the team was ultimately relegated to Series B. With Son establishing himself as one of the best footballers in the world, Lee slowly retreated further and further into his shadow.

That all changed this summer when the 20-year-old burst back onto the Korean football scene. Lee made his senior debut at the 2018 FIFA World Cup and established himself as a crucial member of the team at the 2018 Asian Games.

Lee opened the scoring in the gold-medal match at the Asian Games, knocking one home just a few seconds into extra time to give Korea the lead. Hwang Hee-chan scored a second goal a few minutes later to extend Korea’s lead.

Right after Lee scored, he jumped onto the advertising barriers behind the goal to celebrate.

“When I stood at the top, I could feel the atmosphere of the crowd,” Lee said. “I could see the fans’ facial expressions and hear their loud cheers. I felt like time stopped for a moment. I was covered in goose bumps, and it was one of the happiest moments of my football career.”

Lee’s victory celebration proved particularly popular with fans who were pleased to see that he happened to be standing victoriously atop a Toyota ad.

“It may have been the studs, but it was more slippery than I thought,” Lee said. “If my teammates weren’t holding me, I would have fallen. I saw a lot of comments about how I stood on a barrier advertising a Japanese company. I didn’t really mean to, but I’m glad the fans enjoyed it.”

Although Son steals headlines, dedicated fans have been quietly watching Lee in the hope that he would follow in the older player’s footsteps. Like Son, who dropped out of high school to move to Germany and play football, Lee left for Spain at the age of 13 and played for FC Barcelona’s youth club from 2011.

Lee quickly emerged as a future star at the U-20 FIFA World Cup in 2017 where he was the team’s main striker and helped them advance to the round of 16. Shortly after the U-20 FIFA World Cup, Lee announced his decision to leave Barcelona and signed with Hellas Verona to compete at a more senior level. Once Lee made his senior club debut in the 2017-18 season, national team former head coach Shin Tae-yong wasted no time in selecting Lee for the senior team in June, bringing him to the 2018 FIFA World Cup in Russia.

With the Asian Games win, Lee has also earned a military exemption. He will be able to continue his professional career uninterrupted, raising expectations for just how far the young striker can go.

“I can see that the fans have more interest in the military exemption, but since I’m only 20 years old, I don’t really feel anything about [the military exemption] yet,” Lee said. “Players similar to my age were like me, too, but once I saw Heung-min and other wild-card players being super excited about the exemption, we started to think that we got an enormous benefit to our career.”

Throughout the Asian Games, Lee proved he was a crucial part of the national team, scoring a total of four goals. Those four goals are likely to continue to affect Lee long after the Games - he is likely to spend a lot less time on Verona’s bench this season and a lot more time on the pitch.

Prior to joining the national team for the Asian Games, Fabio Grosso, Verona’s head coach, told him that he has improved his playing style after the World Cup and that he will play a pivotal role in the team’s offensive tactics when he returns.

But it’s not just Lee’s current club that has high expectations for the young striker. He has already caught the attention of scouts from some of Europe’s most elite clubs, with officials from A.C. Milan of Italy’s Series A and Deportivo Alaves of Spain’s La Liga visited Indonesia to watch the gold medal match at the Asian Games.

Although Lee isn’t planning on going anywhere right now, catching the eye of officials from such major teams could have a big impact on his career in the future.

“I heard about the situation [related to my transfer] from my agent,” Lee said. “I’m glad I received attention from great teams. Right now, I’m focusing on trying my hardest in helping Hellas Verona get promoted to the first league. But anything can happen later in the future.”

In the meantime, Lee used the World Cup and the Asiad as opportunities to learn from more experienced players and develop his skills. He said Ki Sung-yueng of Newcastle United, Son and Hwang Ui-jo of Gamba Osaka had a big influence on him.

“Sometimes, [Ki] harshly criticized the players, but every one of his comments made us agree and nod our heads,” Lee said. “[Son] has a different attacking pattern when scoring goals, but from Heung-min, I learned to have strong tenacity to score in matches. Throughout [the Asian Games] I shared a room with Ui-jo. I was very impressed by how he only focused on the tournament despite outside criticism in the beginning.”

Lee is now looking forward to the AFC Asian Cup next year. Korea has only won the quadrennial tournament twice - in 1956 and 1960.

Lee is on track to be added to the national team next year as he successfully made it back on the squad for the September friendlies, the first roster announced under new coach Paulo Bento. In addition to Lee, a total of eight players that competed at the 2018 Asian Games successfully earned a spot on the senior team.

“From the World Cup, I learned to compete against strong teams and from the Asian Games, and I learned to be able to compete through a tough schedule and in poor condition,” Lee said. “I felt awkward seeing the positive comments about me but also happy at the same time. I want to prepare for the Asian Cup. I’ll start by making sure I fit into the new head coach Paulo Bento’s strategy.”

Under the new coach, Korea will play friendlies against Costa Rica at Goyang Stadium today and against Chile in Suwon, Gyeonggi, on Tuesday.