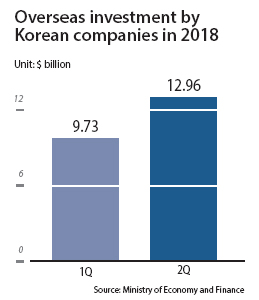 Direct overseas investment made by Korean companies rose sharply in the second quarter of this year while their domestic financial commitments shrunk.

According to data released by the Ministry of Economy and Finance on Thursday, Korean companies invested $12.96 billion from April to June this year in foreign countries, up 25.8 percent year on year and 33.2 percent quarter on quarter.

Korean companies’ offshore investment in the first half of this year came to $22.69 billion, down 4.3 percent compared to the previous year.

By sector, the manufacturing industry took up about 38.4 percent of total investment made overseas by Korean firms during the period, at nearly $5 billion, up 235 percent from a year ago. The financial industry was close behind at 29.9 percent, as Korean companies made $3.98 billion worth of investment in the industry overseas.

An official from the Finance Ministry said that semiconductor companies expanded their investment overseas in the second quarter, leading to the explosive growth in manufacturing investment. The Cayman Islands was the most favored destination for offshore investment by Korean firms, followed by the United States and Hong Kong.

The notable increase in overseas investment comes in stark contrast to the domestic situation, where companies are downsizing their investments.

Data from Statistics Korea shows that industrial investment from local companies has fallen.

After increasing by 5.4 percent and 1.2 percent in January and February, industrial investment by private firms turned negative in March, down 7.6 percent compared to the previous month. It has fallen since then, tumbling by 0.6 percent as late as July. The last time industrial investment made in Korea fell for more than five months in a row was in 1997 to 1998 during the Asian financial crisis, when the streak extended to 10 months.

The Finance Ministry explained that the offshore investments are intended to acquire new technologies and gain market share in other countries and will not have a negative effect on the domestic economy.