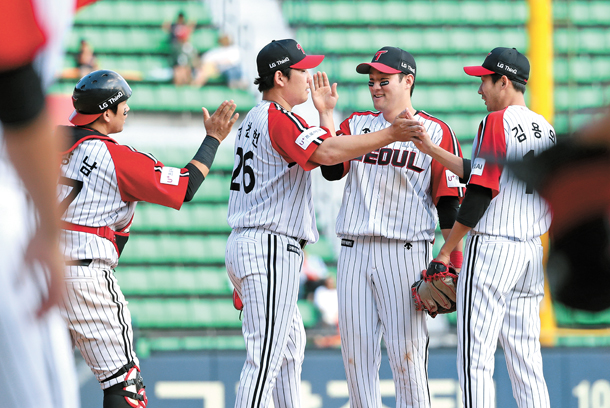 The LG Twins celebrate after beating the Hanwha Eagles 8-5 at Jamsil Baseball Stadium in southern Seoul on Sunday. [YONHAP]

The two-week break for the Asian Games gave the KBO time to rest and recuperate before entering the final sprint toward the postseason. But not every team has fared well - some of the squads desperately competing for the crucial wildcard spot have lost their momentum and look set to stumble out of Korean Series contention.

While the top four teams - the Doosan Bears, SK Wyverns, Hanwha Eagles and Nexen Heroes - have already guaranteed their spot in the postseason, the final wildcard spot is still up for grabs.

Right before the Asian Games break, the final postseason spot looked like it could go to any of four teams - the LG Twins, Samsung Lions, Kia Tigers and Lotte Giants - with just 1.5 games separating them. But just a week after the KBO returned, the Twins are sitting pretty in fifth place, a good 4.5 games ahead of the Giants in eighth.

Coming out of the break, it looked like the Twins might be in trouble with two of their best batters - Kim Hyun-soo and Adonis Garcia - unable to play. The starting pitchers more than made up for the loss, leading the team to a two-game winning streak over the weekend to retain fifth place.

On Sunday, the Twins defeated the Eagles 8-5. The Twins’ starting pitcher Cha Woo-chan gave up two runs and four hits in seven innings to pick up his ninth win of the season. While the two teams were tied at 2-2 at the bottom of the fourth, You Kang-nam and Yang Suk-hwan had two-base hits to take the lead 3-2 and with another four consecutive hits, the Twins added three more runs to extend their lead. Lee Sung-yul of the Eagles hit a three-run home run at the top of the eighth but it wasn’t enough to overcome the deficit.

This was the first game since the game against the Giants on June 24 that Cha pitched more than seven innings in a game.

“Cha Woo-chan pitched well for long innings,” said Ryu Joong-il, manager of the Twins. “Jeong Chan-heon [who picked up a save] also had great last four out counts.”

The return of Cha is exciting, as he was in a severe slump throughout July and August, which led him to miss his spot on the national team for the Asian Games at the last minute. But a two-week break was just what he needed, as he gave up two runs in five innings during a game against the KT Wiz on Sept. 4 and picked up the win on Sunday against the Eagles.

“I felt sorry for my teammates and the fans because I was struggling for so long,” Cha said after the game. “I feel relieved that I’ve fulfilled my role at an important time. I’m not at my best condition yet but I ended with a good result by pitching mostly with curves.”

Twins pitcher Henry Sosa also returned stronger after the break. Right before the break, Sosa felt pain in his hip and struggled with a 6.10 ERA and two losses in five games. During the Asian Games, Sosa rested and focused on recovering.

As a result, Sosa picked up a win against the Eagles on Saturday, where he was able to pitch a fastball at a speed of 153 kilometers (95 miles) an hour, getting 10 strikeouts.

While the Twins are slowly extending their lead at fifth, the Lions and the Tigers are still in contention. The two teams faced each other over the weekend, taking a win each, and the Lions moved up a spot to sixth.

But unlike the three teams that are keeping their chances alive for the wildcard spot, the Giants seem to have purchased a one-way ticket to the bottom of the table. In six games, the Giants have only picked up one win and five losses. The batting lineup, which was ranked among the top in batting average, has been struggling to score. Among the batters, Son Ah-seop has been struggling the most since the Asian Games break, with his bat kept silent in three of the six games.

In addition to the batters’ struggle to score, the Giants aren’t seeing much success on the mound either. Brooks Raley, the first pitcher in the Giants’ rotation, started with two straight losses after the break, with 9.00 ERA and 10.80 ERA. Then the Giants’ other foreign pitcher, Felix Doubront, struggled as he picked up a loss against the Eagles on Sept. 5 by giving up six runs in three and one thirds of an inning.

There is still a slim chance of the Busan club finding a way into the postseason, as the Giants and the Tigers have had the most number of games canceled this season.