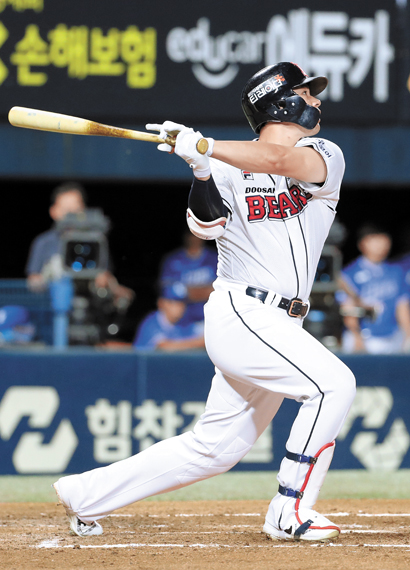 Kim Jae-hwan of the Doosan Bears watches his hit during a game against the Samsung Lions at Jamsil Baseball Stadium in southern Seoul on July 6. [YONHAP]

For the first time since 1998, the KBO home run crown may make its way back to Jamsil Baseball Stadium in southern Seoul this year. With less than a month remaining in the regular season, Kim Jae-hwan of the Doosan Bears is on track to take the prestigious title, taking the top spot with two homers against the Lotte Giants on Tuesday.

With two home runs, Kim overtook Jamie Romak of the SK Wyverns in the home run standing. Kim now sits at the top of the standing with 38 home runs, followed by Romak and Park Byung-ho of the Nexen Heroes with 37 each, as of 6 p.m. Wednesday. As Mel Rojas Jr. trails in fourth with 35 homers, it looks like Kim, Romak and Park will be slugging it out for the home run title.

If Kim ends the regular season at the top of the list, he will be the first Bears player to do so since Tyrone Woods of the OB Bears, the predecessor to the Doosan Bears, scored 42 home runs in 1998. Not only that, Kim will also be the first player from Jamsil, the stadium the Bears share with the LG Twins, to bring home the title since Woods. The Twins and the KT Wiz are the only teams in the KBO to have never won the home run title - the Twins have been around in some form since the KBO was founded in 1982, while the Wiz didn’t enter the big league until 2015.

Up until May, Kim wasn’t considered a serious contender in the home run race as he finished with 12 home runs in the first 51 games. Since Kim has hit more than 35 home runs in two previous seasons, it was quite a disappointing start for the Bears’ cleanup hitter.

At the time, Doosan manager Kim Tae-hyung said, “He doesn’t have good balance [now] but he’ll come back soon. I was worried that he may feel overwhelmed as cleanup hitter, but I don’t think I need to worry.”

Just as Kim Tae-hyung said, Kim Jae-hwan wasted no time in getting back in form in June, hitting 14 home runs that month. Although Kim’s bat wasn’t as hot in July and August - hitting only eight home runs - he returned from the Asian Games with a vengeance, hitting five home runs in seven games as of Tuesday’s game.

“I competed at the Asian Games, but since I played mostly as a designated hitter, I don’t feel too tired physically,” Kim said.

Jamsil is the biggest stadium in the KBO, making it difficult for players to hit too many home runs. Before Woods in 1998, the only other Bears player to win the home run crown was Kim Sang-ho in 1995.

The Bears doesn’t lack talent - Doosan is the third most successful Korean baseball team of all time and have dominated the league this year - but the challenge of knocking the ball out the park at Jamsil has made it difficult for Doosan players to pull ahead. Woods’ 42 homers in 1998 is still the club record, although Kim is on track to exceed that record with a likely 45 to 46 home runs.

Kim’s home run prowess comes from his power rather than a higher launch angle. Although 30 degrees is considered to be the ideal launch angle for a home run, Kim hits way lower at 20 degrees. As a result, most of Kim’s home runs are exceptionally powerful line drives, not high hits.

“Generally, the hitting point should be in the front to create big hits,” said Jang Sung-ho, a KBS N commentator. “But Kim Jae-hwan just swings harder after watching the ball. This swing is only possible [to hit home runs] because he has the power. He is hitting more home runs because he improved his batting skills from last year.”

Although Kim might soon make Bears history, he isn’t too worried about the record.

Kim believes that RBIs are more important than home runs. The two home runs against the Giants on Tuesday allowed him to add five more RBIs to his statistics this season, once again extending his lead.

“Since it directly connects to scoring runs, RBIs are more important to me,” Kim said. “I’m able to add more RBIs because our table setters are getting on base a lot.”