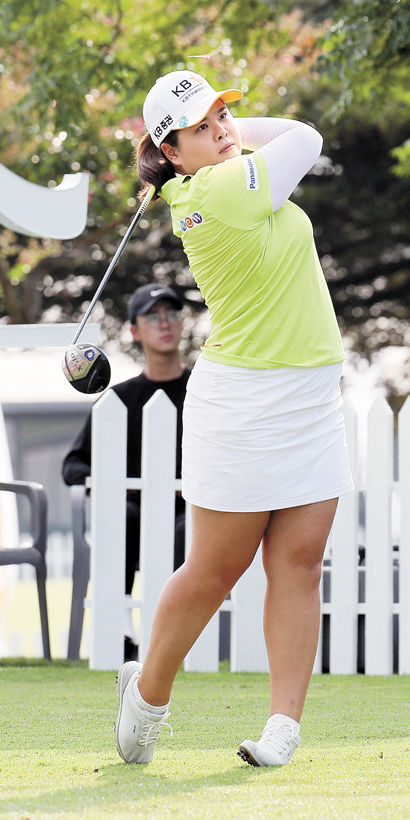 Park In-bee watches her shot during the first round of the KLPGA Tour’s Jeju Samdasoo Masters at Ora Country Club on Jeju Island on Aug. 10. [YONHAP]

After a two-week break, the LPGA Tour resumes with its last major tournament of the season, the Evian Championship. For Park In-bee, the championship is the last tournament that she needs to win to achieve a Super Career Grand Slam.

Park is one of the most decorated golfers of all time. She has won four of the five major tournaments - the ANA Inspiration, U.S. Women’s Open, KPMG Women’s PGA Championship and Women’s British Open - a total of seven times throughout her career. In addition to her major titles, she has won a total 19 LPGA Tour events.

When Park won the Women’s British Open in 2015, she became the seventh player in LPGA Tour history to win four different major tournaments during her career, an achievement that is known as a Career Grand Slam. Park continued her success the following year, becoming the first women’s individual golfer since 1900 to win an Olympic gold medal in 2016.

Despite Park’s successful career, she has one last major victory that is yet to be added to her impressive resume - the Evian Championship. Although Park won the tournament in 2012, it doesn’t count as a major victory as she won before the LPGA designated it as the fifth major in 2013.

Last July, Park said, “the Evian Championship is like the last homework for me.”

But winning the French tournament has proven a challenge. Since it became a major tournament, she hasn’t finished higher than tied for eighth in 2015. For the last two years, she has been unable to compete due to injuries.

This might not be Park’s year either. The Hall-of-Famer is not entering the tournament in peak condition, having missed the cut for two major tournaments this year - the KPMG Women’s PGA Championship and U.S. Women’s Open. Most recently, Park finished tied for 30th at the Portland Classic on Sept. 2.

“I’m glad to not have any injuries, but since I wasn’t playing in tournaments every week, I feel like I’m missing something,” Park said.

This season, Park has won two tournaments - the Bank of Hope Founders Cup on the LPGA Tour and Doosan Match Play Championship on the KLPGA Tour - but she has been struggling with inconsistent shots.

Park will play her first round along with Pernilla Lindberg of Sweden, who won the ANA Inspiration earlier this season, and Ryu So-yeon.

Aside from Park In-bee, Park Sung-hyun, the No.1 female golfer in the world, Chun In-gee, who won the tournament in 2016, Kim Hyo-joo, the 2014 champion, and 14 other Korean golfers will compete in the tournament.