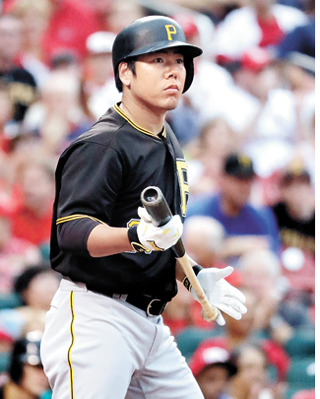 Kang went under the knife for cartilage debridement in his left wrist on Aug. 3, and his estimated recovery time was four to six weeks.

According to MLB.com, Kang will eventually face live pitching and get into games during the instructional league if rehab goes well.

The operation was yet another blow to what once seemed to be a promising big-league career for the 31-year-old. He hasn’t played in the majors since October 2016.

Kang missed the entire 2017 season because of legal trouble in Seoul. In December 2016, he was arrested and charged with fleeing the scene of an accident after driving under the influence of alcohol. It was his third DUI arrest in Korea, and he received an eight-month jail term, suspended for two years, in March 2017. He lost his appeal two months later.

Although he avoided prison time, Kang was denied a U.S. work permit after his arrest and was unable to enter the United States to play for the Pirates. He finally got his visa in April this year and joined the Pirates’ Advanced A affiliate, the Bradenton Marauders, in early June. There, he batted .417 with three homers and 11 RBIs in seven games before earning a promotion to the Triple-A Indianapolis Indians.

In nine games with the Indians, Kang batted .235 with five RBIs and no homers, and was placed on the disabled list on June 27 with a left wrist sprain. The Pirates said Kang first experienced discomfort on June 20.

Kang signed a four-year, $11 million deal before the 2015 season, with a $5.5 million team option or a $250,000 buyout for 2019. He is the first Korean position player to jump from the Korea Baseball Organization to the MLB.