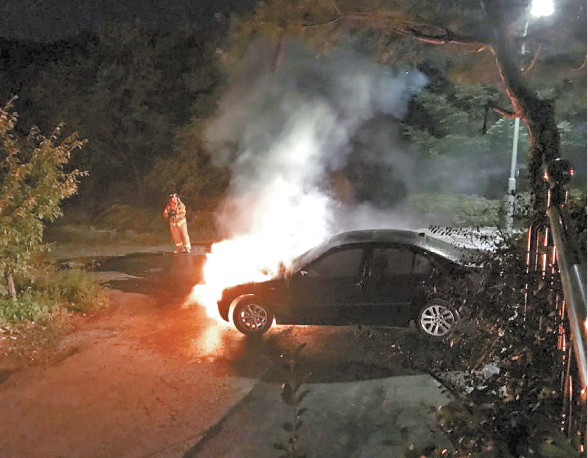 A gasoline-powered BMW 3-Series, which wasn’t included in the latest recall list, caught fire in Yongin, Gyeonggi on Monday. [YONHAP]

BMW cars are still bursting into flames in Korea as a huge recall here continues after a spate of vehicle fires over the summer crippled the German automaker.

A BMW X5 30d SUV caught fire on Tuesday evening in Seoul while it was being driven. The 2007 version of the model is powered by diesel and is not included in the recall list. The fire did not cause any injuries.

The driver pulled over after realizing that the steering wheel was not operating properly. The engine quickly caught fire once the car had stopped, the driver told a local fire station. No injuries were reported.

“We are currently looking into the case to figure out the reason behind the fire,” a spokesperson for BMW Korea said Tuesday.

BMW Korea is currently in the process of recalling more than 106,000 diesel cars across 42 models due to a risk of fire which the carmaker claims derived from defects in the emission gas recirculation (EGR) system.

More than 40 fires have been reported in both diesel and gasoline models this year. A majority of the fires broke out during July and August when temperatures hit a record high.

The frequency of fires subsided as temperatures started to drop. In early August, BMW fires were being reported nearly every day.

Industry insiders, however, claim that the decreasing number of fires due to the cooler weather should not be mistaken for a fix.

“It seems as if the case is resolved due to the decreasing number of fires,” said Lee Ho-geun, an automotive engineering professor at Daeduk University who is leading an independent investigation team with the Korean Consumer Association. “That should not be mistaken with the elimination of the root cause of the fire. The investigation should continue until we figure out a clear and convincing cause.”

Experts in Korea have been claiming that the EGR is not the only cause of the fires. BMW Korea has maintained that the hardware issue is the only problem, but experts here have raised the possibility of a software error.