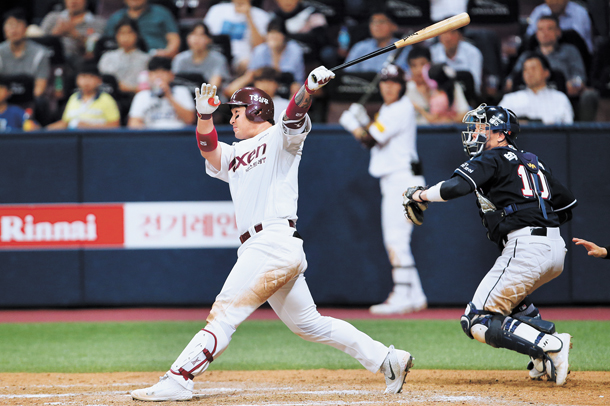 Park Byung-ho of the Nexen Heroes, left, hits his 40th home run of the season during a game against the Doosan Bears at Gocheok Sky Dome in western Seoul on Tuesday. [YONHAP]

Park Byung-ho of the Nexen Heroes made KBO history on Tuesday when he hit his 40th home run of the season for the third consecutive year.

A total of four players in the KBO - Lee Seung-yuop of the Samsung Lions, Eric Thames formerly of the NC Dinos, Park and Choi Jeong of the SK Wyverns - have managed to hit 40 home runs a season for two straight years, but Park is the league’s first-ever player to do so for three consecutive seasons.

This season, Park and Choi were in contention to be the first to achieve the record, but as Choi had to miss two weeks before the Asian Games, he slowly fell out of the race. Before he went out with an injury, Choi had hit 31 home runs.

The milestone came during a game against the Doosan Bears at Gocheok Sky Dome on Tuesday. Kim Jae-hwan of the Bears was first to hit a home run, a solo homer at the top of the fourth inning while the Bears were losing 1-3. The Bears went on a scoring streak, taking the lead 7-4 by the top of the seventh inning.

With his 40th home run, Park is now one step closer to taking the league’s home run title for the fifth time.

But this might not be Park’s year. Kim hit another home run against the Heroes on Wednesday to extend his lead in the league standing to two. The Heroes won both of the games against the Bears, winning Wednesday’s game 5-4 in extra innings.

Considering Park’s more than a month-long absence in the beginning of the season due to a hamstring injury, his achievement is beyond impressive. Once he returned in May, Park hit five home runs in 10 games and from June to August, he quickly joined the race for the home run title by hitting 24. Thanks to his impressive home run streak, Park was selected as the KBO’s August MVP.

In addition to Park’s home run achievement, he also became the first-ever KBO player to reach 100 RBIs in a single season for five consecutive seasons.