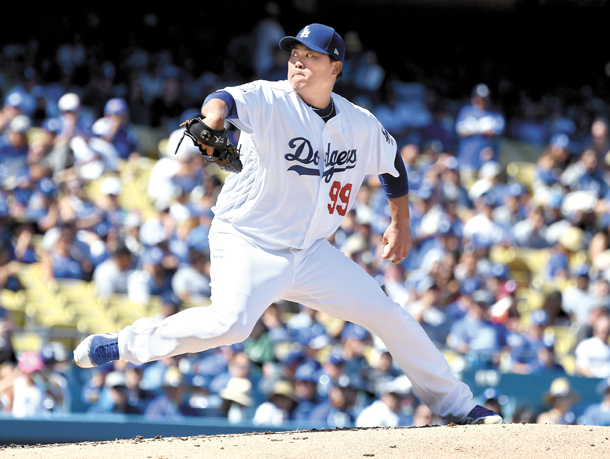 Ryu Hyun-jin of the Los Angeles Dodgers throws a pitch in the second inning of a game against the San Diego Padres at Dodger Stadium on Sept. 23. [GETTY IMAGES/YONHAP]

Pitcher Ryu Hyun-jin of the Los Angeles Dodgers will start his last game of the regular season against the San Francisco Giants tomorrow morning Korea time.

After a three-game series against the Arizona Diamondbacks on Wednesday, the Dodgers traveled to the Giants’ AT&T Park in San Francisco for their last chance to move back up to the top of the National League West standings.

The Dodgers lost the last game of their series against the Diamondbacks 7-2 on Wednesday, and the Colorado Rockies won against the Philadelphia Phillies 14-0 to take first place in the National League West standings. The Dodgers are now ranked second in the division with 88 wins and 71 losses for the season.

Starting Saturday, the Dodgers will play a three-game series against the Giants. This is the last series of the regular season schedule, and will determine whether the Dodgers advance to the postseason.

If the Dodgers don’t win the division, they will still have a chance to advance to the postseason by winning the wild card game.

Previously, Ryu was considered likely to start Sunday’s game against the Giants, but Dodgers manager Dave Roberts announced that Ryu will open the three game series. When Ryu returned to the Dodgers roster after missing more than three months with a groin injury, he had been impressive, recording a 1.93 ERA over eight games.

Throughout the 2018 season, Ryu picked up six wins and three losses with a 2.00 ERA in 14 games. In his two most recent games, Ryu threw for scoreless innings to pick up wins. His fastball topped 150 kilometers (93 miles) per hour and Ryu did not give up a single walk. After his impressive return, Roberts mentioned that Ryu had the potential to get into the starting rotation in the postseason.

“There was some thought in starting Ryu along these lines, for sure,” Roberts was quoted as saying by MLB.com. “But these games right now are the most important. It is a possibility, and we have to think through that, too.”

This season, the Giants have lost any hope of playing in the postseason, as they are ranked fourth in the National League West with 73 wins and 86 losses. However, that doesn’t mean that the Dodgers will walk away with easy wins, as the two teams have a longtime rivalry in their division.

Against Ryu, the Giants will use Madison Bumgarner as their starting pitcher. Since 2011, Bumgarner has thrown for more than 200 innings and picked up 15 wins or more for six straight seasons. During the World Series in 2014, Bumgarner was selected as the MVP after picking up two wins and a save.

Despite his successful career, Bumgarner had been struggling with injuries for the past two seasons. In 2017, he settled with four wins and nine losses with a 3.72 ERA after he was injured in a dirt bike accident. This season, Bumgarner had to wait until June to start his season, as he fractured his left hand when he was hit by a line drive during an exhibition game. Bumgarner has picked up six wins and six losses with an ERA of 3.20 this season.

In the games Bumgarner started against Ryu throughout their career, Bumgarner has picked up three wins while Ryu only won once.

Bumgarner’s career batting average is .183 and he has hit 17 home runs. After hitting four and five home runs each in the 2014 and 2015 seasons, he won the Silver Slugger Award for both seasons.

The Silver Slugger Award is awarded to the best offensive player at each position in both the American League and the National League each season.

This season, during the Giants’ game against the San Diego Padres on Wednesday, Bumgarner appeared as a pinch hitter and knocked out a hit.

Although Ryu hasn’t yet hit a home run, he has been a useful batter in the Dodgers lineup this season. Ryu has a career batting average of .188. During the Dodgers’ game against the Padres on Monday, Ryu batted three-for-three with two runs scored to help the Dodgers to a 14-0 victory. Ryu improved his batting average to .292 with two RBIs and four runs in 15 games this season after the game.