After two years away, Kang Jung-ho returns to the plate

After two years away, Kang Jung-ho returns to the plate

After returning to the majors after two years away, Pittsburgh Pirates’ Korean infielder Kang Jung-ho has now recorded a hit in two straight games. 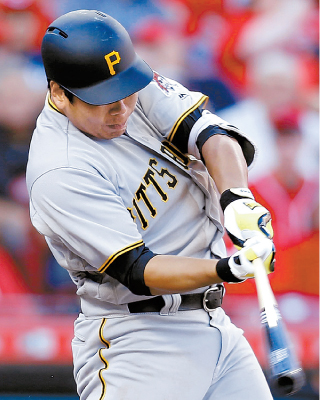 Kang Jung-ho hits a single during a game against the Cincinnati Reds on Saturday. [GETTY IMAGES/YONHAP]

Batting fifth and playing third base, Kang went 1-for-4 in the Pirates’ 3-0 loss to the Cincinnati Reds at Great American Ball Park in Cincinnati on Saturday. This was the first major league start since Oct. 2, 2016, for Kang, who dealt with legal issues and injury over the past two years.

On Friday, Kang collected a pinch-hit single in his lone plate appearance against the Reds.

On Saturday, Kang was held hitless in his first two at-bats, hitting a grounder to third in the second inning and going down swinging in the fourth against Cincy starter Michael Lorenzen.

Then with men at first and second with two outs in the sixth, Kang jumped on a first-pitch fastball from Lorenzen and lined it to right field. But the ball was hit too hard for Josh Bell to score from second base.

Kang’s hit chased Lorenzen from the game, and the Pirates failed to cash in on the bases-loaded opportunity.

Kang grounded out to third in his final at-bat in the top of the ninth.

Kang, a former All-Star shortstop in the Korea Baseball Organization (KBO), put up solid numbers as third baseman for the Pirates in 2015 and 2016. But then legal issues and injury kept him off the field for the entire 2017 season and most of this year.

In December 2016, Kang was charged with fleeing the scene of an accident after driving under the influence of alcohol in Seoul, and received a suspended jail term three months later. He was denied a U.S. work visa, which prevented him from joining the Pirates.

Kang got his work permit in April this year and began playing in the minor leagues in June. Then he came down with a left wrist sprain later that month and underwent surgery on Aug. 3, which threatened to end his comeback bid.

Kang started taking swings two weeks ago and returned to action just before the final three-game series of the regular season.

They may decline that option and attempt to sign Kang to a cheaper deal as a free agent. If Kang decides to return to the KBO, he can only sign with his former club, the Nexen Heroes, which still reserve rights to Kang because he left via posting rather than free agency.

Without Kang, rookie Colin Moran served as the Pirates’ primary third baseman this year, and he is batting .277 with 11 homers and 58 RBIs in 143 games so far. Incumbent shortstop Jordy Mercer will become a free agent after this season, and the Buccos may choose to keep Kang at a lower salary and slide him back to shortstop.