Samsung Electronics once again set quarterly records for profit and revenue thanks to high demand for the semiconductor chips needed to propel today’s key technologies.

However, Korea’s biggest company is facing challenges as its current portfolio is heavily dependent on computer chip sales. Its smartphone business is struggling as sales of its flagship Galaxy S9 smartphone sales failed to reach expectations. 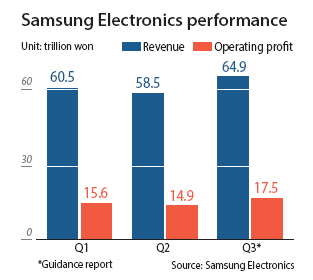 Brokerage firms estimated that Samsung Electronics made roughly 25 trillion won in revenue in semiconductors in the third quarter, up 24 percent from last year’s 19.9 trillion won.

The operating profit of the memory business is estimated to have increased by 36 percent to 13 trillion won, which would be an all-time record.

DRAM revenue is believed to have surged 47 percent year-on-year to around 14 trillion won while NAND flash was up more than 8 percent during the same period to 7 trillion won.

The company’s display business is estimated to have improved sharply in the third quarter as well, contributed by Apple’s release of the latest iPhone, equipped with organic light-emitting diode (OLED) display, in September.

The company’s dependency on its semiconductor’s business is becoming an increasingly large concern.

“While the third quarter guidance report is positive in that it exceeds earlier market consensus, heavy dependency on semiconductor performance is a negative [for Samsung Electronics],” said Kim Yang-jae, analyst at KTB Investment & Securities. “[Samsung Electronics] is facing a slowdown on earnings momentum, as DRAM prices has been falling since the fourth quarter.”

DRAMeXchange, a computer chip market research firm, estimated that DRAM and NAND flash prices will fall in the fourth quarter compared to the third quarter due to difference between supply and demand. When compared to the third quarter, DRAMeXchange projected a 5 percent drop in the fourth quarter, sharper than earlier estimates of a 1 to 3 percent decline.