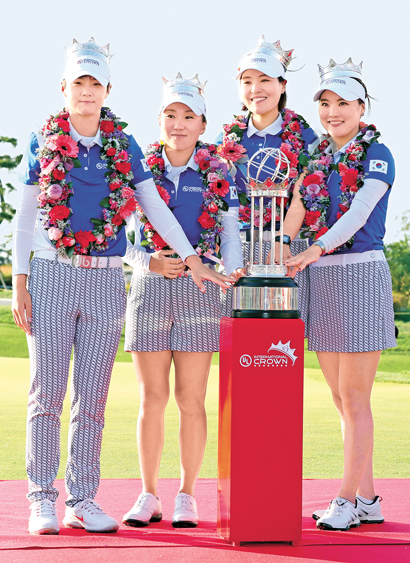 Before the singles matches Sunday, the players had to finish their third-round four-ball matches in the morning. Anticipating the arrival of Typhoon Kong-rey, the LPGA had moved the second round tee times about two hours earlier so the players could get the third round of the four-ball matches started on Friday. The rain washed out Saturday’s competition, so the players once again came out to the course early on Sunday to get their third rounds in.

Based on the points received from the four-ball matches, the top two teams from each group and one wild-card winner advanced to Sunday’s singles matches. Thailand was the last team to qualify for the singles matches as a wild card.

Heading into the final round with a two point lead, Korea upped its pace to end the tournament at 15 points, with seven wins, two losses and a tie, to finish four points ahead of the United States and England.

Although Park Sung-hyun, the first player to tee off in the singles matches for Team Korea, lost her match to Ariya Jutanugarn of Thailand 2 and 1, Chun In-gee won her match against Sweden’s Anna Nordqvist one up on the final hole. Korea had therefore guaranteed its victory before the last two matches were completed.

Chun got off to a quick start by taking a one-up lead on the first hole against Nordqvist. She continued her momentum by winning three more holes to take a four-up lead by the par-4 10th. Although it seemed as if Chun was going to have an easy time of it, Nordqvist slowly caught up by winning the par-4 11th, par-3 12th and par-5 15th with birdies.

Chun and Nordqvist both parred the final three holes of the round, leaving Chun one up. With that singles win, Chun went undefeated at the tournament this year, the only player to do so in UL International Crown history.

“I won a KLPGA Tour event at this golf course before,” Chun said. “When I had a birdie putt on the last hole, I felt even more nervous than at that time. Although I didn’t get the birdie, I’m glad I still got the win for my team.”

Following Chun’s victory, Kim In-kyung put the ribbon on Korea’s surge with a two-up win against England’s Bronte Law. When the pair headed to the last hole, Kim had a one-up lead and Korea’s 12 points was one point ahead of England; Georgia Hall of England had defeated Cristie Kerr of the United States 2 and 1.

Once Kim’s match was completed, Ryu So-yeon halved her match against Lexi Thompson of the United States to add another point for Team Korea. Thompson, too, earned a point by halving the match, so the United States tied for second with England.

The points in the singles matches were distributed just like in the four-ball matches, where a team earns two points for a win, one for a draw and zero for a loss.

With the win, each member of the Korean team will take home prize money of $100,000. Including the practice round, the attendance at the tournament was about 75,000 fans in total.

This is the third edition of the tournament; Korea finished third in 2014 and runner-up in 2016.

The LPGA Tour will continue at the LPGA KEB Hana Bank Championship from Oct. 11 to 14 at Sky 72 Golf Club Ocean Course in Incheon.