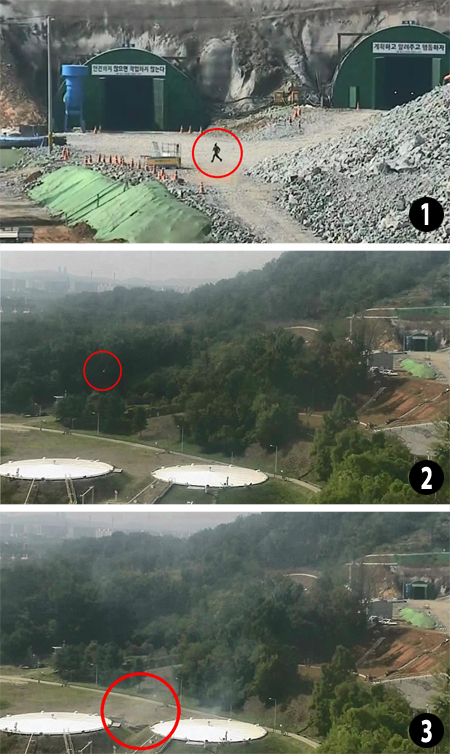 1: Surveillance footage still from Sunday morning shows a Sri Lankan man chasing after a sky lantern he lit and released at a tunnel construction site. 2: Still shows the lantern landing in grass near one of the outdoor gas storage tanks 300 meters (984 feet) away from the construction site. 3: Smoke rises from the gas tank not long after the lantern’s landing nearby. [GOYANG POLICE DEPARTMENT]

The massive blaze that burned through an oil tank at a gasoline storage station in Goyang, Gyeonggi, on Sunday was caused by a sky lantern released by a Sri Lankan construction worker, said police on Tuesday.

The Goyang Police Department said it arrested the 27-year-old Sri Lankan man on Monday after surveillance footage from Sunday morning showed him releasing a sky lantern from a nearby tunnel construction site where he worked and following it a distance of 300 meters (984 feet) to the storage station.

The lantern landed on a patch of grass close to an outdoor oil tank, and footage shows the man running away from the scene after witnessing the grass catching fire.

Police believe the fire spread through the grass into the oil tank’s ventilation system, where it combusted accumulated oil mist and set off an explosion that led to the giant blaze.

The fire raged for over 17 hours, burning through 2.66 million liters (702,697 gallons) of gasoline inside the tank. It took a total of 684 firefighters and 224 firefighting vehicles to finally put it out early Monday morning. A post-incident investigation by fire authorities and police concluded that the fire caused around 4.35 billion won (around $3.8 million) in damages to the Daehan Oil Pipeline Corporation, which owns the tank.

Though no one was injured as most of the station’s workers were off work on Sunday, the fire - which released toxic fumes and smoke that could be seen over a dozen miles away in southern Seoul - proved so intense that firefighters could not come within a hundred meters and had to deploy unmanned fire engines to spray fire-suppressing foam.

Firefighters worked to prevent the fire from spreading to 20 other outdoor and underground gas tanks at the storage station.

The Sri Lankan worker told police after his arrest on Monday that he lit the sky lantern, which was 60 centimeters (23.6 inches) high and 40 centimeters wide, out of curiosity after he discovered two lanterns that landed at the construction site after a ceremony at a nearby elementary school a day earlier.

A gust of wind blew the lantern away just after he lit the small fuel cell inside, said the worker, and he chased it towards the storage station but did not see the lantern landing on the grass.

But police concluded that the man was aware that the storage facility contained flammable material and arrested him on charges of misdemeanor arson.

The oil pipeline company that operates the storage center has also been the target of public ire for its delayed response to the fire and the lack of security that led to the incident in the first place.

Surveillance footage from Sunday demonstrates nothing was done as smoke rose from the tank for over 18 minutes before the blast, despite the fact that six employees were on duty that day.

Though the company’s CEO publicly apologized while the fire was still raging on Sunday, the company rebutted some of the accusations of mismanagement Tuesday.

“Sensors and security systems as well as surveillance cameras are installed at the site and guards patrol the area on a regular basis,” said a company spokesman. “But it is difficult for us to monitor the footage constantly enough to detect something like a sky lantern.”