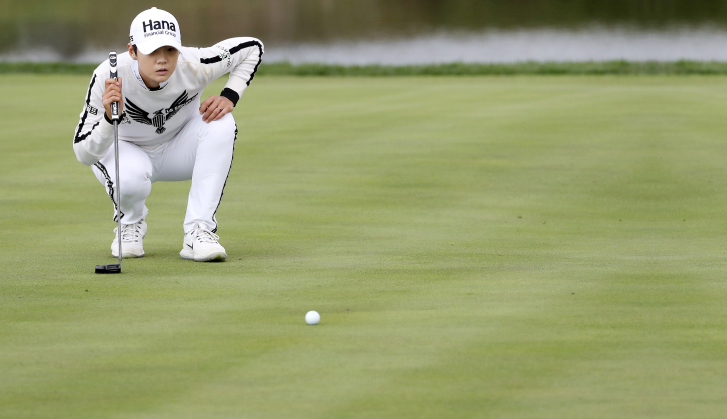 Park Sung-hyun reads the line of her putt during the first round of the LPGA KEB Hana Bank Championship at Sky 72 Golf Club Ocean Course in Incheon on Thursday. [YONHAP]

The high winds and chills didn’t stop some impressively low scores being recorded on the first day of the LPGA KEB Hana Bank Championship at Sky 72 Golf Course Ocean Course in Incheon on Thursday.

With seven birdies and a bogey, Nasa Hataoka of Japan shot seven under-par, 65, to take a two-shot lead in the field. After finishing the first nine with three birdies, Hataoka got on a roll in the back nine, making five birdies and a bogey.

“I think most of all, I was hitting very solid, so I made myself a lot of birdie opportunities,” Hataoka said. “I had eight birdies today, and that really helped me.”

However, Hataoka’s no-bogey streak ended on the par-3 17th, which led her to finish the round with a two-shot lead in the field instead of three as she struggled with the wind on the last two holes.

“As a professional golfer, I believe that we need to be able to play solid under any conditions, including very strong winds,” Hataoka said. “I think up until the 17th hole, I managed the wind very well. But at the 17th hole, I struggled to manage the wind.”

Danielle Kang of the United States and England’s Charley Hull are tied for second at five under par.

Kang started her round slow with a bogey on the par-4 second, but kept herself going throughout the round by making six birdies to move into a runner-up position in the first round. Kang wasn’t complaining as she enjoyed playing under tough conditions.

“I took it shot by shot today honestly, and it’s definitely tough conditions. And I love - I actually really enjoy tough conditions, because then you have to, every part of your game has to be in play,” Kang said. ”Everything worked really solid today. I just worked on keeping it steady, keeping consistent and not get too ahead of myself.”

Hull also had an interesting round, with seven birdies, one eagle and four bogeys.

“I hit it close,” Hull said. “Holed some good puts, and then I think I had a couple of 3-putts, but I’m pretty happy with the way I played.”

A total of 6,238 fans turned out to watch the players and, as expected, world No.1 Park Sung-hyun’s group drew the biggest crowd on the first day. Amongst the Korean golfers, Park has one of the biggest fan bases. And they didn’t go home disappointed as Park met expectations with a round of four under par, at 68.

“It was very windy today, but I was hitting very well and putting very well as well,” Park said. “With this going my way, I think I was able to make seven birdies. But I have to say, a double-bogey on the 17th was disappointing.”

Throughout the first round, Park made seven birdies, one bogey and a double-bogey. While tied at second on the par-3 17th, Park’s teeshot left her ball buried deep in the bunker. Due to this, Park failed to get her second shot onto the green and, after finally getting back in the game on the third shot, Park two-putted for a double-bogey.

She finished strong on the last hole with a birdie. Park hit her drive left, but a lucky bounce from the cart path brought her ball back onto the fairway and allowed her to hit her second shot about 100 yards ahead of the others.

“I knew that I could make up for my score on the next hole,” said Park. “I didn’t see where the ball landed at first, but I heard fans cheer. As I started walking down the fairway, I spotted the ball well down the fairway. My caddie and I were pretty happy. We thought the ball went maybe 400 yards. I think that this being the first round also helped me feel a little more comfortable about any errors or mistakes I’ve made today.

Along with Park, Minjee Lee of Australia is tied at fourth while Ariya Jutanugarn of Thailand is tied for sixth at three under par along with four other golfers.