Will this be the Skywalkers’ year?

Will this be the Skywalkers’ year? 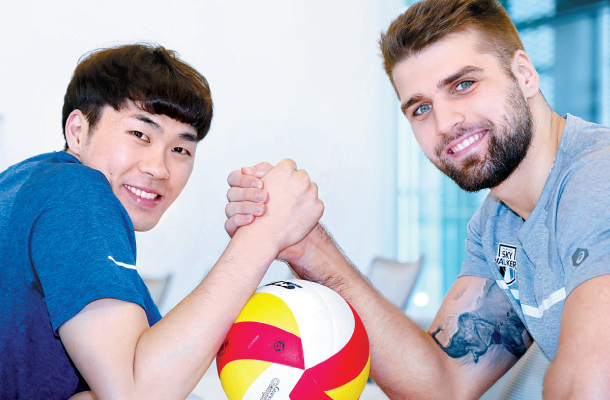 The Cheonan Hyundai Capital Skywalkers are set to start the 2018-19 V-League season as the stand-out favorites with the addition of Krisztian Padar and Jeon Kwang-in.

Upon completion of the 2017-18 season, Padar and Jeon were considered the biggest free agents in the V-League market, as Padar was third in league scoring at 966 while Jeon was the league’s constant pick for best-seven and a core member of the national squad. As Moon Sung-min and Shin Young-suk, who led the Skywalkers to three straight postseason appearances, are still part of the club this season, the addition of the two new stars poses a major threat to the other teams in the league.

Despite having the best players, the Skywalkers didn’t see much success at the KOVO Cup, a preseason tournament that started on Sept. 11, as they had trouble with teamwork. As a result, the Skywalkers got eliminated in the semifinals by losing to Samsung Blue Fangs 3-1.
During the KOVO Cup, Padar and Jeon didn’t seem to have successfully adjusted to the Skywalkers’ team play. Jeon continuously failed to match his tempo with setter Lee Seung-won.

Jeon’s problems caused frustration in the team. At one point, Skywalkers head coach Choi Tae-woong turned to him and asked, “Why are you here?”

Although the lack of teamwork at the KOVO Cup was disappointing, it is somewhat explained as the two joined the team only a week before the tournament.

Starting today, teamwork will no longer be an excuse for poor performance as the V-League’s six-month long regular season starts. Since the KOVO Cup, the team had been focusing on working together so the two can blend into the playing style.

“I was playing for the national team throughout the entire summer,” Jeon said. “So when I joined the team, I was lost. To be honest, I’m still adjusting.”

Padar, who is playing his third season in the Korean V-League, also said the team had been focusing heavily on teamwork. In 2016, Padar arrived in Korea, signing with Seoul Wooricard Wibee.

“Since the Cup tournament, we’ve been working on teamwork while in Japan for offseason training,” said Padar. “We’ve had tough training sessions for the past three weeks.”

The Skywalkers’ tough training is likely thanks to their built facilities, completed in 2013, which are considered to be the best in the league. The Skywalkers have the most up-to-date analysis equipment.

“When watching the Skywalkers before I was a part of the team, they seemed to be having so much fun playing volleyball,” Jeon said. “But that came from a tremendous amount of training. Hyundai Capital’s gymnasium has the best facilities for volleyball. Since they have two training courts, the team can have two separate training sessions at the same time. We train right after our meals and right after going to sleep.”

As a result of the support the team had received, Jeon and Padar had to work harder than ever to live up to expectations. To blend in to the Skywalkers’ play, Jeon had to change the habits that he had developed through his 18-year volleyball career.

Since the Skywalkers have a faster playing style, Jeon had been working on changing his spike steps and his hitting swing.

“The head coach had been watching my training clips and told me which areas to work on,” said Jeon. “I learned that I had a lot of areas to improve on. Since they are little details, they’re not easy to fix. But for effective volleyball, I’m going to try as hard as I can.”

In addition to Jeon, Padar, too, doesn’t leave the gymnasium. Even on his days off, Padar comes out to the gymnasium and trains. Despite having competed in European and Chinese leagues, among others, Padar said the Skywalkers have some of the best facilities he’s ever seen.

“The Hyundai Capital Gymnasium has [some of the] best training facilities in the world,” Padar said. “If you train in this kind of facility, you just get to play better volleyball. I’m excited to see how much I can improve from now.”

Although the two have been spending a significant amount of time training and trying to adjust to the team’s fast playing style, they believe that a little more time is needed to perform at their best.

“Even a normal office worker needs about three months to adjust to their new working environment,” said Jeon. “But I’ll try to adjust [to the team] a little quicker than that. I may need a lot more time blending into Hyundai Capital’s fast play, but I can promise that I’ll get better each day.”

The Skywalkers will start their 2018-19 season with a match against the Incheon Korean Air Jumbos, the defending champion, at Gyeyang Gymnasium in Incheon at 2 p.m. today.