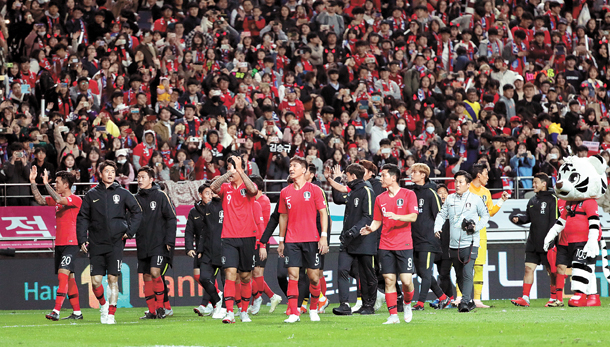 Korea will try to finish this year’s last football match at home on a high note when they welcome Panama for a friendly match.

Korea, 55th in the latest FIFA rankings, will face 70th-ranked Panama at Cheonan Stadium in Cheonan, South Chungcheong, today. The two sides are meeting for the first time in their national team histories.

The friendly against Panama is Korea’s last home match of 2018. The Taeguk Warriors are scheduled to face Australia and Uzbekistan next month, but both matches will be in Brisbane, Australia.

Since head coach Paulo Bento took the helm in August, Korea have yet to suffer a loss. Bento’s side started with a 2-0 win over Costa Rica and had a 0-0 draw with Chile last month. They beat Uruguay 2-1 in a friendly match in Seoul on Friday.

Panama, one of the teams making a debut appearance in the FIFA World Cup at Russia 2018, are coming off a 3-0 defeat to Japan on Friday. They have not collected a win since April.

Although Panama are considered relatively easy opponents compared to previous teams that Korea faced, Bento is likely to field his best players on the pitch to collect a win.

The friendly against Panama is also the last match this year in which Korea can test their tactics with Tottenham Hotspur star Son Heung-min.

The Korea Football Association (KFA) and Tottenham previously agreed not to play Son for Korea’s November friendlies and the first two matches at the Asian Football Confederation (AFC) Asian Cup in January as a trade-off for Son’s Asian Games appearance this summer.

Bento has been sticking to a 4-2-3-1 setup since he became the bench boss for Korea. He has been emphasizing a buildup process from the back and quick transitions. The Portuguese head coach will likely inspect his team closely to find problems that need improvement.

Bento could make a few changes for the Panama friendly because 10 players from his October friendlies roster didn’t play a single minute in the match against Uruguay.

One player who will certainly miss the Panama match is Lee Jae-sung. The Holstien Kiel midfielder received permission to return to his German club following a knee problem.

Bento is expected to juggle between Hwang Ui-jo and Suk Hyun-jun for a striker position. Hwang, the top scorer at the Asian Games, was the starting striker against Uruguay and scored the team’s opening goal. But Suk, who replaced Hwang in the second half, showed his presence with a powerful header that led to Jung Woo-young’s winner against Uruguay.

Panama brought 20 players for their friendly matches in Asia. Of the 20, 15 competed at the 2018 World Cup.