The PGA Tour is coming to town

The PGA Tour is coming to town 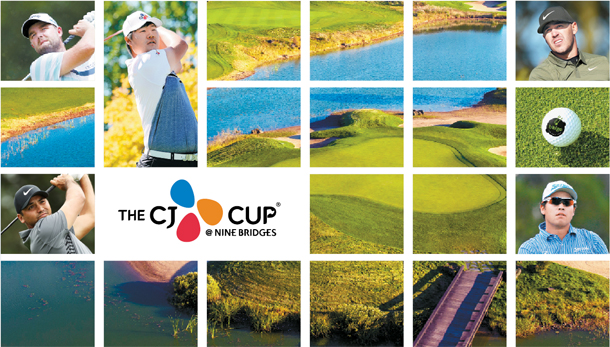 The second edition of the CJ CUP @ NINE BRIDGES kicks off in Jeju tomorrow.

The players will once again tee off for Korea’s only PGA Tour event at the Club at Nine Bridges, the only Korean course to be ranked among the world’s top 100. The 78-player field looks tougher than last year as it includes 12 major champions competing in the tournament this weekend. All 78 participants will play through the weekend with a total prize money pot of $9.5 million and 500 FedEx Cup points.

“We are pleased to announce a second wave of international and South Korean PGA Tour stars for our tournament later this month,” CJ CUP @ NINE BRIDGES Executive Director Travis Steiner was quoted as saying by PGA. “The inaugural CJ CUP @ NINE BRIDGES last year was an incredible success, and we expect the second edition to top that with the impressive line-up of players who have committed to compete in Jeju Island.”

Justin Thomas, the inaugural champion, once again made his return to defend his title this year. Having started the tournament with an outstanding 9 under par last year, Thomas’ victory came after he defeated Marc Leishman of Australia in the second playoff hole. Thomas, the fourth ranked player in the world, hopes to repeat his success at Jeju with a big win.

“The tournament was awesome,” Thomas was quoted as saying on the PGA website. “It’ll be fun to return to the CJ CUP @ NINE BRIDGES. Any time you can go back to defend a title, it’s always good. I’ve got good memories from my win there last year and hopefully I can create new memories when I return in October.”

Thomas enters the tournament after another successful year - he won three tournaments and briefly topped the world ranking for four weeks in May. Continuing his success from the previous season, Thomas finished tied for fifth at the CIMB Classic in Kuala Lumpur on Sunday.

But it won’t be too easy for him this year, as three-time major champion Brooks Koepka will be visiting Korea in hopes of securing a strong start to the season. Following his successful 2017 campaign, where he won the U.S. Open, Koepka had a stronger 2018 season by winning two major tournaments - the U.S. Open and PGA Championship. Winning two major titles in a single season allowed Koepka to win the 2018 PGA Tour Player of the Year award and also moved him up to third in the world ranking.

“I’m looking forward to playing in the CJ CUP @ NINE BRIDGES for the first time,” Koepka was quoted as saying. “It has been a phenomenal year and my wins at the U.S. Open and PGA Championship are certainly the highlights. Hopefully, I will continue this good form and give the Korean fans something to enjoy. I am excited to make my first visit to Korea and I plan to take in some of the many attractions that Jeju Island has to offer.”

In addition to the two, former world No. 1 Jason Day of Australia will make his return to Jeju, hoping for a better result than last year. Day finished tied for 11 last year, but since then he’s had an impressive run with two PGA Tour victories last season. Once again, this will be Day’s first tournament of the new season.

Marc Leishman of Australia, who finished runner-up last year, hopes to win back-to-back titles as he enters the tournament with a victory in his season opener at the CIMB Classic last week.

“I am excited to be back in Korea,” Leishman said at a pre-tournament press conference on Tuesday. “Hopefully, I can play well again and do one better than last year. Golf is a funny game. It can change very quickly, from bad to good and from good to bad. To win my first event of the season [last week] puts me in a different frame of mind for the whole year.”

Along with the two Aussies, former world No. 1 and Masters Champion Adam Scott will also return to the tournament.

PGA Tour rookie Im Sung-jae hopes to continue his stride in front of the home crowd this weekend. At his PGA Tour debut two weeks ago at the Safeway Open, Im finished tied for fourth, just one shot short of joining the four-way sudden-death playoff.

Im earned his full-time PGA Tour status card this season by topping the 2018 Web.com Tour Regular Season money list, where he won two events. Im’s victory at the Web.com Tour’s season opener allowed him to become the 16th player to win the event in his first appearance and the seventh Korean-born golfer to win on the Web.com Tour.

He finished the season strong by winning the season finale, the WinCo Foods Portland Open. Although Im didn’t take first place at any events except the season opener and closer, he has still managed to maintain the top spot in the Web.com Tour money ranking, the only player to do so in the Tour’s history.

“I am really comfortable being home,” Im said during a pre-tournament press conference on Tuesday. “I was a bit surprised when i saw the pairings. I am excited and nervous at the same time. I know I won’t get opportunities like this very often, and i am thankful. The course is spectacular, and the greens are in excellent shape.”

Im will play his first round along with Thomas and Koepka.

Expectations are higher than ever for Im this week as he will be the first ever Jeju-born golfer to compete in the tournament. Aside from Im, 12 other Korean-born golfers will compete, including 2017 The Players champion Kim Si-woo, Bae Sang-moon, 2015 European Tour rookie of the year An Byeong-hun and KPGA money leader Park Sang-hyun.

Hideki Matsuyama, the highest ranked Asian golfer at No. 20, will stop in Jeju for the first time to start off his season. Matsuyama had a strong finish in the 2017-18 season by finishing tied for fourth at the season-ending TOUR Championship.