The Phoebus aren’t messing around this season

The Phoebus aren’t messing around this season 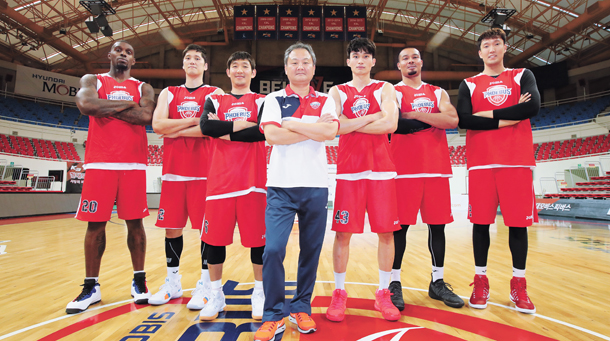 The Korean Basketball League (KBL) season may have only just begun, but the Ulsan Hyundai Mobis Phoebus isn’t wasting any time starting its race to first place in pursuit of its first regular season title in three years.

As of Sunday’s game, the Phoebus is leading the league with six wins and one loss. Although their five-game winning streak ended with an 86-76 loss against the Seoul SK Knights on Saturday, the Phoebus has a dominant .857 winning percentage.

The team’s strong start has earned them a whole new nickname - the Movengers. The new name, a portmanteau of Mobis and Avengers, recognizes that the Phoebus has the strongest lineup in the league, with four-time KBL MVP guard Yang Dong-geun, center Lee Jong-hyun, guard Lee Dae-sung and forward Ham Ji-hoon all performing at their best.

The Phoebus also has Ra Gun-ah, a naturalized American-born athlete who first joined the KBL in 2012. Ra gained Korean citizenship last year, meaning that the Phoebus is allowed to have both him and two foreign players - Shannon Shorter and D.J. Johnson - on the team. However, due to a special league regulation, Ra and Johnson are banned from being on the court at the same time.

The Phoebus has even more power on its bench - veteran shooters Moon Tae-jong and Oh Yong-jun.

“They can make two different teams from the starting players,” said Choo Seung-kyun, head coach of Jeonju KCC Egis, prior to the start of the season.

As expected, the Phoebus lived up to the high expectations by scoring more than 100 points in their first three games this season. They further extended their winning streak to five, which includes a thrilling one-point victory against the Egis, considered another favorite to win the regular season.

Although the Knights ended the Phoebus’s winning streak on Saturday, the Phoebus quickly got back on track, defeating Anyang KGC 102-81 on Sunday.

Behind the success of the Phoebus, there’s also the change in head coach Yoo Jae-hak’s playing strategy.

“This season, I prefer playing faster basketball,” said Yoo. “We still spend two thirds of our training time in defense, but since we have stronger members, our offense got stronger. This season, we’ll try to get our scoring average above 90 points per game or maybe somewhere close to 100.”

Under Yoo, Yang and Ra successfully led the Phoebus to three straight regular season victories, from 2012 to 2015. At the time, Kim Si-lae, now of the Changwon LG Sakers, and former player Rod Benson also started.

“At the time, I was busy playing because I was young,” Yang said. “But our team this season has more experience and is more relaxed.”

After three regular season victories, Ra left the Phoebus for three seasons, playing for the Seoul Samsung Thunders and in the Phillipine league until last year. This season, Ra believes that the Phoebus is a lot stronger than three years ago. But it’s not only the starting players that he believes are stronger.

Ra is once again proving to be a must-have player on the team, as he has been averaging 27.3 points per game with 17.9 rebounds as of Sunday’s game.

The Phoebus has seen potential from its non-starting players. During the game against the Egis on Saturday, Shorter struggled, but Lee Dae-sung scored 24 points to lead the team to a win.

As the Pheobus has one too many veteran players on the team and Ra wasn’t given much of a break after the 2018 Asian Games, the physical conditioning of the starting players was considered a crucial weakness. Not only that, as Lee Jong-hyun focused mostly on recovering from Achilles surgery, he wasn’t able to fully prepare himself physically for the season.

That’s why Yoo is giving more playing time to bench players this season to limit the starting players’ minutes per game and make sure the bench isn’t missing its chances.

“Rather than power basketball, head coach Yoo Jae-hak told me to relax more when I play,” said guard Yang Dong-geun. “So I try to be more relaxed when I take a shot. The fans might think that I’m not trying.”

As a veteran player, Yang hopes to go through the season without any injuries, just like Lee Dong-gook of Jeonbuk Hyundai Motors in K League 1. At 37 years old, Yang is the third oldest player on the team, after Moon Tae-jong and Oh Yong-jun.

“Since we have a long regular season, we might have unexpected problems like injuries,” said Yoo. “KCC, ET Land, SK and LG are all great teams. But if we can overcome the struggles and play our own games, we can win. Since we’ve rested for three years without winning, I can’t wait.”

The Phoebus will play their next game against the Incheon ET Land Elephants at Samsan World Gymnasium in Incheon tomorrow at 7:30 p.m.