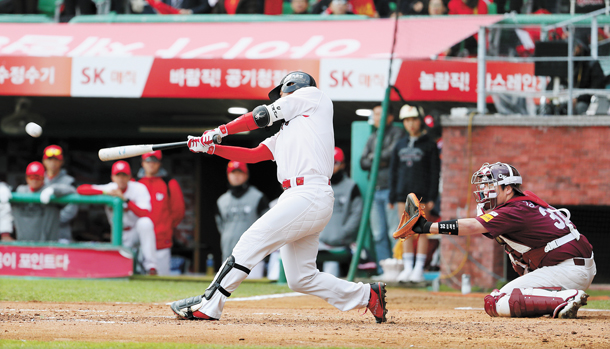 Kim Kang-min of the SK Wyverns, left, hits an RBI single at the bottom of the third inning during Game 2 of the playoffs at Munhak Baseball Stadium on Sunday. [YONHAP]

For the second straight day in the Korean baseball postseason, the SK Wyverns received a major offensive contribution from one of their seasoned veterans.

In Sunday’s 5-1 win over the Nexen Heroes in Game 2 of the second round in the Korea Baseball Organization (KBO) postseason, 36-year-old center fielder Kim Kang-min went 2-for-4 with a home run and two RBIs.

His performance came just 24 hours after 37-year-old designated hitter Park Jung-kwon delivered a game-winning two-run homer in the bottom of the ninth inning, lifting the Wyverns to a 10-8 victory.

The Wyverns now sit one win from reaching their first Korean Series since 2012.

On Sunday, Kim first came through with a game-tying single in the bottom of the third. Then in the bottom fifth, with the score knotted at 1-1, Kim launched a solo shot off Nexen starter Eric Hacker to give his team a 2-1 lead. The Wyverns never lost their advantage.

Kim batted leadoff and played center field for the second straight game, as Ro Soo-kwang, the usual leadoff man and center fielder, has been ruled out for several weeks with a broken finger.

During the regular season, it was Ro, 28, who took away playing time from Kim and limited the veteran to 80 games, Kim’s lowest total in 13 years. Kim also spent a couple of months early in the season in the minors.

Prior to the series, the absence of Ro - who scored 93 runs and stole 25 bases while batting .313 in the regular season - was seen as potentially devastating for the Wyverns.

And yet from the start of the series, Kim has played like his old self, while making people forget about Ro. Kim has batted 3-for-7 in two games with a pair of homers and four RBIs.

Kim entered this series with 52 career postseason games, more than any other player on either team. The value of big game experience is difficult to quantify - though some would even say it’s overrated - but the Wyverns will happily take their two straight victories, helped in large part by two of their old guards.

The Wyverns are playing in their first postseason since the wild card game in 2015. Kim said he thought he’d get nervous about playing meaningful October games for the first time in a while, but that hasn’t been the case so far.

“I think my focus has been pretty sharp, and I’ve been able to really enjoy playing in these games,” Kim said. “Over my postseason career, I’ve seen a lot of my teammates playing out of their minds. I feel like I am doing exactly that now.”

On his home run, Kim said he had guessed correctly that Hacker would come with a fastball early in the count, after watching the team’s No. 8 hitter, Kim Sung-hyun, take a fastball on the first pitch to start the inning.

Sure enough, Kim Kang-min swung on a fastball for the home run.

“Hacker wasn’t throwing too many fastballs earlier in the game,” he said. “But after Sung-hyun’s at-bat, I was pretty convinced Hacker had changed his patterns and he would offer me a fastball early.”