The rapid rise and fall of Korean curling

The rapid rise and fall of Korean curling 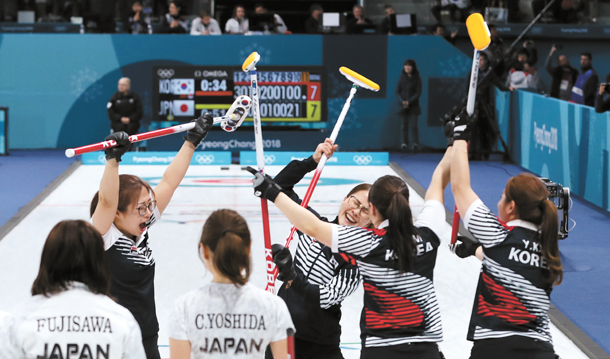 The Korean women’s curling team celebrate after winning the semifinal game against Japan at the 2018 PyeongChang Olympics at Gangneung Curling Centre in Gangwon on Feb. 23. [NEWS1]

Korean women’s curling superstars Team Kim may have dominated the 2018 PyeongChang Olympics, making headlines around the world and going down in history as one of the most dominant Asian teams of all time, but their remarkable success was not enough to stop the rapid downfall of the sport’s governing body, the Korean Curling Federation (KCF).

The 2018 Olympics truly were a golden age for Korean curling. Kim Yeong-mi became a household name on the other side of the world, while skip Kim Eun-jung - along with her infamous stare that launched a thousand curling stones - accidentally became one of the standout stars of the entire Games. But away from the glitz and glamor of the Gangneung Curling Center, there was serious trouble brewing in the KCF.

Months prior to the Olympics, the KCF officially went into a “special care” status due to its leadership vacuum. A bitter feud in the organization and complaints of cronyism and unfair practices had erupted over recent years, leaving Korean curling with nobody in the driving seat. Things looked like they would change after Team Kim slid their way into second place at PyeongChang, but eight months later, there is still nobody in charge at the KCF.

Making matters worse, long-time sponsor Shinsegae decided on Oct. 5 to end its relationship with the federation. The sponsorship deal, which began in 2012 and worth 10 billion won ($8.7 million), was intended to ensure that Korea had a successful finish at the PyeongChang Olympics - it did.

The KCF says the 10 billion won was spent on operating expenses, prize money for domestic tournaments and hosting competitions, but won’t provide a detailed breakdown of expenses.

As the KCF still doesn’t have a chairman and has lost its sponsor, it is struggling to send players to compete in international tournaments. Originally, the KCF said it planned to send the winner of the national team trial to the first World Cup event in China and the runner-up to the second World Cup event in the United States in December.

However, due to financial issues, the KCF announced that only the winning team will compete in both of the World Cup events.

“Since our contract with our sponsor ended, we’re having financial difficulties,” said the KCF. “Due to this, we decided to send the Chuncheon team, who won the national team qualifier, to the second World Cup event as well.”

But who is the runner-up that suddenly lost their chance to compete at the World Cup? Olympic silver-medalists and Korea’s all-time most decorated curling team, Team Kim.

Team Kim has long been at odds with the KCF. A feud between the family of coach Kim Min-jung, whose father first brought the sport to Korea, and the current governing body has often caused questionable scenes to arise at official events, with the KCF reportedly even going so far as to try and persuade Team Kim to change coaches ahead of the Olympics.

The national team trial, which was held in August, was a familiar tale of poor planning, with the final schedule not confirmed until two to three weeks before the event began.

Team Kim won all seven of their qualifying games, but lost the final to the Chuncheon team, conceding first.

Team Kim’s silver medal at the Games is still considered one of the biggest upsets of this year’s Winter Olympics. For Korea, a country that has only once qualified for the Olympics in any curling event - men’s, women’s or mixed doubles - to make it out of the round robin stage was completely unexpected. The team’s achievement has completely changed the face of the sport in a country that, until this year, was almost completely unaware of its existence.

The unlikely Cinderella story caught the public’s imagination outside of Korea as well, and Team Kim quickly gained a global following.

But the team’s popularity wasn’t enough to keep the federation running properly. Due to the disastrous situation at KCF, the federation failed to send a mixed curling team to compete at the Winn Rentals World Mixed Curling Championship 2018, which ended on Oct. 20 in Kelowna, Canada. In fact, the tournament wasn’t even mentioned on the KCF website.

The KCF has been suffering through a leadership vacuum since its former president, Jang Mun-ick, failed to get approval from the Korean Sport & Olympic Committee in June 2017 as the national Olympic body said ineligible members participated in the vote.

Due to this, KCF Vice President Kim Kyung-doo - Kim Min-jung’s father - became the interim leader. Just 60 days later, Kim was suspended by the federation he was supposed to be leading because an election had not been called. Since Kim Kyung-doo was suspended, the KCF has had no leader.