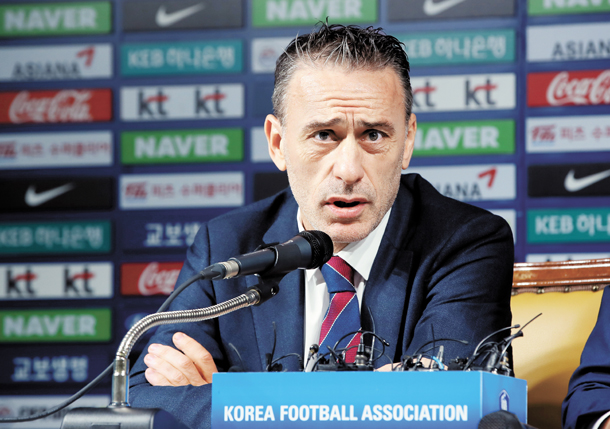 Head coach Paulo Bento announces his roster for the upcoming friendly matches at a press conference at KFA House in Seoul on Monday. [YONHAP]

Head coach Paulo Bento announced his 26-man roster for the November friendlies in Australia at KFA House in Seoul on Monday.

The two games in Australia will be Korea’s last friendly matches before the Asian Football Confederation’s (AFC) Asian Cup in the United Arab Emirates, which is scheduled to kick off in January. When Bento was first appointed head coach, he said his goal was to lead Korea to win the 2019 AFC Asian Cup. The Taeguk Warriors haven’t won the tournament since 1960.

Since Bento took charge in August, Korea has collected two wins and two draws in four friendly matches at home. The two matches in Australia will be Bento’s first time abroad with the Korean team.

“I will check our team’s performance on the road and whether the players can adjust to a new environment,” Bento said. “At home, we played our second match 96 hours after the first one. But this time, we only have 72 hours so I’ll also check how the players can deal with the short rest time.”

Bento’s 26-man roster shows a good mix of both young and veteran players. Notable among the older players is Lee Chung-yong of VFL Bochum. This is the first time in six months, since he was cut from the final 23-man roster for the 2018 FIFA World Cup in Russia, that the winger has returned to the national team and the first time he has been picked by Bento.

Lee has been selected as the most likely replacement for Son Heung-min of Tottenham Hotspur. When Son competed at the 2018 Asian Games, both the Korea Football Association and the Spurs agreed that Son would not compete in the November friendlies.

“I expect Lee Chung-yong to display his strength with the national team,” Bento said at a press conference. “I’ve known this player since even before I took the helm, and I believed that he’ll be useful for this team someday.”

Although Hwang Hee-chan of Hamburger SV and Moon Seon-min of Incheon United have shown potential in recent national team matches, they have both revealed a crucial weakness in their performance: a lack of experience. Lee’s addition is expected to offer some balance.

Lee, who joined German club VFL Bochum this season, has 79 international caps. His new club career has got off to a strong start as well with three assists during the team’s match against SSV Jahn Regensburg on Oct. 30. Lee recorded yet another assist during Bochum’s match against SpVgg Greuther Furth on Friday.

“He has shown good performance for his club recently and played lots of matches,” Bento said.

Bento has outwardly demonstrated his support for Lee Chung-yong, excluding Lee Seung-woo of Hellas Verona and Lee Jae-sung of Holstein Kiel who both play the same position.

“Lee Jae-sung recently made his comeback for his club, but we thought it’s risky to include a player who has just returned from injury,” Bento said. “As for Lee Seung-woo, we have good attackers who can also play in his position, and competition is fierce.”

Lee Seung-woo was added to the national team in Bento’s four friendly home matches, but didn’t get any playing time under the new head coach.

While Ki Sung-yueng of Newcastle United has been excluded from the roster, Bento selected three young players as potential replacements: Na Sang-ho of Gwangju FC, Kim Jung-min of FC Liefering, and Lee You-hyeon of Jeonnam Dragons.

Koo Ja-cheol of FC Augsburg also returned to the national team. This is the first time Koo has been added to Bento’s roster.

“These players have been under our watch,” Bento said at a press conference. “I wanted to check them this time. We have been watching and evaluating many players.”

To replace Jang Hyun-soo, who received a lifetime ban after doctoring his community service records, Bento selected Kwon Kyung-won of Tianjin Quanjian. This is the first time since June that Kwon has been added to the national team.

“Not only at the Asian Cup, but we’ll have matches like the [2022] World Cup qualifiers in the future,” Benton said. “To reach our goal, I’ll keep calling up the players who I think can be big contributors for this team.”

“Although there are some changes in our squad, we want to keep our style of play,” Bento said. “Whether they have national team experience or not, I want to see how we can play with these newcomers.”