Though Korean golfer Lee Jeong-eun won the qualifying event for next season’s LPGA Tour, she isn’t sure if she’ll take her talent to the top competition right away. 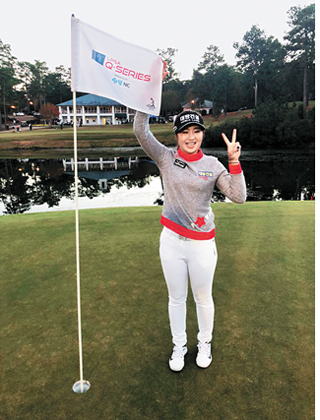 Lee Jeong-eun poses on the seventh green at Pinehurst Course in Pinehurst, North Carolina, after winning the LPGA Tour Q-Series on Sunday. [YONHAP]

Lee, the reigning KLPGA Tour Player of the Year and ranked No. 19 worldwide, won the inaugural LPGA Q-Series with an eight-round total of 18-under 558 at Pinehurst Course in Pinehurst, North Carolina, on Saturday.

Lee started the final round in second place, just two strokes behind Sarah Schmelzel. Lee fired a two-under 70, while Schmelzel fired a 76, dropping to third place. Jennifer Kupcho ended in second place with a 17-under.

Lee dominated the KLPGA in 2017, winning a tour-best four tournaments while scoring average and leading everyone in money.

This year, Lee has been splitting her time between the Korean tour and the U.S. tour while still leading the KLPGA in money and scoring average.

Lee teed off her career in the ninth grade, about five years later than most players. Despite her late start, she earned a spot on the national team in 2015 and managed to win a gold medal at the 2015 Summer Universiade that same year. Within a few months, Lee made the KLPGA Tour after playing in the Jump and the Dream Tour.

Lee was named rookie of the year in 2016 and won the KLPGA Tour’s Player of the Year award last season.

Lee is scheduled to play in the KLPGA’s season finale, the ADT Caps Championship, starting this Thursday.

The 22-year-old said she’ll have to speak with her family once she’s back home before deciding where she’ll play next year.

“I didn’t go to the Q-Series with plans of playing on the LPGA Tour even if I qualified,” Lee said. “I don’t speak English, and I just think the U.S. is too big of a country. I’ll have to talk to my parents and my sponsors.”

Lee said she didn’t expect to come out on top at the qualifying event and that she was surprised at how well it all turned out for her.

“The greens were really fast, and the par-3 holes were quite long,” Lee said. “Overall, the fairways were tight and I had to concentrate hard on every shot. Playing eight rounds over two weeks was more challenging than I thought it would be, but I think it was a fair process.”