Group has many plans for resort

Group has many plans for resort 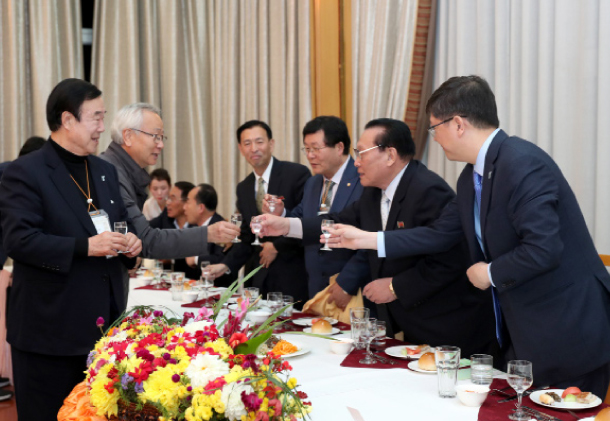 A Seoul-based pro-unification civic group led by the youngest son of former South Korean President Kim Dae-jung, whose engagement of Pyongyang won him the Nobel Peace Prize in 2000, gathered with North Korean officials over the past weekend at the Mount Kumgang resort to mark the group’s 20th birthday.

The Korean Council for Reconciliation and Cooperation (KCRC), headed by Kim Hong-gul, 54, said in a press release Monday that both sides agreed to boost cooperation and engagement at all levels.

Blocked by South Korean sanctions that ban tourism in Mount Kumgang, the group said it would “actively pursue … the opening” of the resort by holding events on womankind, youth and academic conferences there, boosting sociocultural exchanges between the two countries.

Mount Kumgang, located at the southeastern edge of North Korea’s Kangwon Province, was a linchpin of inter-Korean cooperation before a South Korean tourist was fatally shot there by a North Korean guard in July 2008. After the North opened a tourist zone at the scenic area in 1998, some two million South Koreans visited until the fatal shooting, which prompted Seoul to impose a travel ban.

The KCRC said it agreed with its North Korean counterpart, the Consultative Council for National Reconciliation, to hold a joint symposium before March 2019 on Korean victims of forced labor during Japan’s colonial rule of the peninsula in the early 20th century. Working-level talks on the symposium as well as the formation of unified committees on forced labor and sociocultural exchanges will be held in early December, the press release continued.

The KCRC said it conveyed “various” business proposals to the North, including one from a South Korean company that suggested a march across the peninsula for college students from both Koreas.

The North was said to have replied it would “positively review” the proposals and added it hoped South Korean conservative lawmakers will visit the North to directly talk with them while “seeing the reality.”

The 20th anniversary event was held from Saturday to Sunday with 256 people participating from the South and about 120 people from the North. South Korean attendees included KCRC Chairman Kim Hong-gul; Rep. Sul-hoon, a member of the Supreme Council within the ruling Democratic Party (DP); DP Rep. Kim Han-jung; DP Rep. Lee Jae-jung; Kim Ju-young, president of the Federation of Korean Trade Unions; and Choe Keum-sook, president of the Korean National Council of Women, among others.

The North’s side was represented by Kim Yong-dae, chairman of the Consultative Council for National Reconciliation, and other officials.

Several North Korean officials asked a JoongAng Ilbo reporter who was part of the South Korean delegation covering the event how the U.S. midterm election results would impact South-North and North-U.S. relations.