Korea and China’s shared history of calligraphy: Exhibit shows how masters of the art perfected their craft

Korea and China’s shared history of calligraphy: Exhibit shows how masters of the art perfected their craft 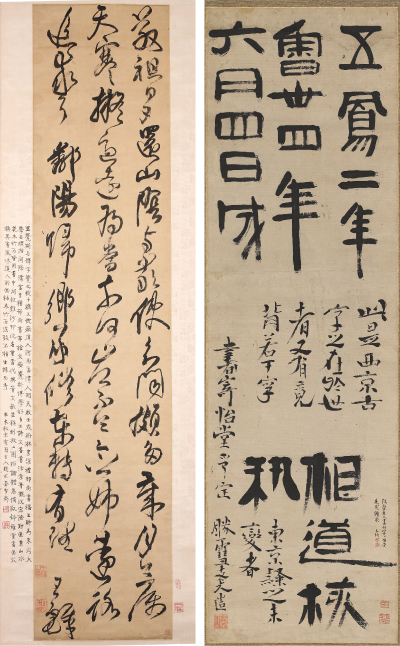 Left: A copy of Wang Xianzhi’s “Jingzu tie” by Wang Duo (1592-1652) is the “Calligraphy Copying of Qing Dynasty” section of the exhibition. Right: A copy of ornamental seal characters from the Han Dynasty by master calligrapher Kim Jeong-hui (1786-1856) of the late Joseon Dynasty. [NATIONAL HANGEUL MUSEUM]

Perhaps as a response to the digital era we live in, writing on paper with ink has become trendy in recent years. People have started filling up calligraphy classes and bookstores stock both calligraphy guide books and stationary to meet the rising demand. The first step in mastering calligraphy is to practice copying great pieces by master calligraphers by writing over their works and mimicking the brush strokes.

This method was also popular during the Joseon Dynasty (1392-1910), an era when there were great calligraphers. Many master calligraphers in China also used this method of endlessly copying other great works going as far back as the Qing Dynasty before becoming great masters themselves. These efforts can all be seen at an exhibition that recently kicked off at the National Hangeul Museum of Korea in central Seoul’s Yongsan District.

The exhibit is a joint project by the National Hangeul Museum and the Shandong Museum in China, and is the Korean museum’s first collaborative exhibit since it opened four years ago.

“Korea and China have long shared a history of calligraphic culture through the recording medium of ink-brushes and experienced similar changes in calligraphy culture together with the development in documental archaeology and epigraphy,” said Park Yong-gook, director of the museum.

The exhibition starts off with calligraphic works from the Shandong Museum, titled “Calligraphy Copying of Qing Dynasty.” Some 30 items from the museum are exhibited, including some of China’s state-designated treasures.

In this section, visitors can check out how calligraphers copied the originals and turned them into their own work through the juxtaposition of the original and the copy. Included in the exhibit are important works such as the copy of Wang Xianzhi’s “Zingzu tie” by Wang Duo (1592-1652) and a copy of Mi Fu’s “Jiweitaishi tie” by Kong Jisu (1727-91).

A handwriting textbook, left, for children during the U.S. Army Military Government in Korea. [YIM SEUNG-HYE] 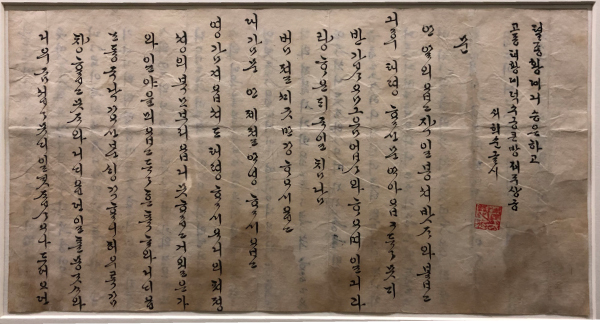 The visitors are then guided to the second part of the exhibition organized by the National Hangeul Museum, titled “Dreams of a Master Calligrapher.” It displays some 120 works highlighting the study of calligraphy and the tradition of calligraphy copying in Korea since the 17th century.

Here visitors can witness works of Chusa Kim Jeong-hui (1786-1856) who was a scholar, critic and master calligrapher during the late Joseon Dynasty. Kim himself copied calligraphy of other master works such as “Guoyoudao bei” in 1853, which is also on display.

The royal families of the Joseon Dynasty often had court ladies who were selected as writers for their beautiful handwriting. They hand wrote letters and documents on behalf of the royal families, developing their calligraphy skills and practicing copying great calligraphy works. Their practice papers are also on display at the exhibition.

“By witnessing that these great master calligraphers also began by copying other great works to hone their abilities,” said Park, “we hope that the people of today can also continue practicing the skills by copying and studying calligraphy so that it doesn’t go by and continues as an ongoing tradition.”

The exhibition runs until Jan. 20. Admission is free.