Choi He-yong claws her way back

Choi He-yong claws her way back 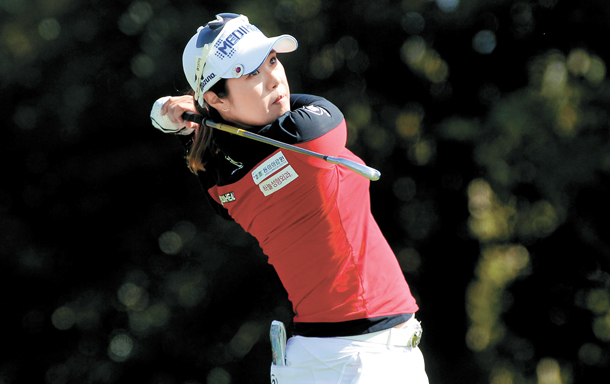 Choi He-yong watches her shot during the first round of SK the Networks Seokyung Ladies Classic on Oct. 25. [YONHAP]

When Choi He-yong first started playing golf as a youngster, she quickly entered the spotlight. But her professional career seemed to fizzle out just as quickly. Rather than retire, Choi managed to overcome her slump and has had a strong end to the season.

Since Choi first started the sport, she has shown an outstanding ability to read the greens, making putting her strength.

At the 2006 Asian Games in Doha, Choi won the bronze medal in the women’s individual and the gold in the team event.

Although Choi fell behind Ryu at the Asian Games, she took the Rookie of the Year Award when the two made their debuts on the KLPGA Tour in 2008. While the two players were continuously dubbed rivals, the two tournaments in 2009 ? the Doosan Match Play Championship and MBC Tour S-Oil Champions Invitational ? finally ended any such talk.

“I was even more shocked about that loss than the ninth-hole playoff loss,” Choi said.

After the two tournaments, Choi slowly fell from the top of the Tour where she finished 67th in 2013 money ranking. She was relegated to the second-division Dream Tour, while Ryu expanded her career onto the LPGA Tour.

As Choi received much attention when she first started golf, it took a while for her to recover from her slump. After playing two seasons on the Dream Tour, Choi returned to the KLPGA Tour in 2016. Though she hasn’t yet won a tournament, she’s improved this year and is currently No. 57 in the money ranking.

The top 60 players in the money ranking after the season retain their Tour status card for the following season.

“Up until my early 20s, I didn’t know what failure was,” Choi said. “But once I got to the second tour, I found out that I had a very happy career as a professional golfer all this time. It was a good opportunity to learn to keep myself focused and not get too full of myself.”

Since Choi first started golf, she had been a perfectionist. Although she didn’t play according to the book, she believed she had to stick her chip shots close and make putts all the time.

“Once I started getting more ambition, I started to rush myself and lost motivation,” Choi said. “I’ve been a player who plays by feel, so it got very complicated when I started learning theories of golf. I had great coaches, but I just wasn’t good enough to take it all.”

Choi’s thoughts of being a perfectionist slowly changed when she played with LPGA Hall-of-Famer and former world No.1 Park In-bee.

“When she misses a putt, she thinks it’s reasonable and start preparing for her next shot on the tee box,” Choi said. “But when I didn’t make a putt, my mistake was stuck in my head throughout the round. I learned that I needed an ability to forget about my mistakes.”

Although Choi is only 28 years old, on the KLPGA Tour, she is considered an older player, as she on her 11th season. Only about 10 players on the KLPGA Tour are older than Choi. On the LPGA Tour, Ryu, who is the same age as Choi, is now ranked Nov. 3 in the world. Due to this, Choi works as hard as everyone else, practicing from 9 a.m. to 6 p.m. everyday.

“My rivalry against Ryu So-yeon was a long time ago,” Choi said. “So-yeon has become too great of a player to be considered my rival. So-yeon is smart and has great self-management skills. I still talk to her sometimes. I was able to continue playing the sport without quitting in the middle because I had So-yeon.”

This season, Choi’s hard work has slowly paid off. She had the best finish of her season with her seventh place finish at the SK Networks Seokyung Ladies Classic on Oct. 28. Although she didn’t win the tournament, it was an impressive tournament for Choi, as it was the first time in 10 years that Choi headed to the final round as a leader.

Now that she has one tournament remaining in the season, Choi hopes to finally win a tournament and eventually play on LPGA Tour.

“When I was 17, I played at the British Open,” Choi said. “Playing at St Andrews Links Old Course, I remember making an eagle on a difficult 17th hole. My goal is to still play on the LPGA Tour. If I’m at a level to compete on the KLPGA Tour, I believe that I can also compete on the LPGA Tour. All challenge myself to move onto the United States after I win a tournament in Korea.”

Starting tomorrow, Choi will compete at the 2018 ADT Caps Championship at Ferrum Club in Yeoju, Gyeonggi.

“I had disappointments, but there were a lot more positives,” Choi said. “I’m more excited about what’s to come.”