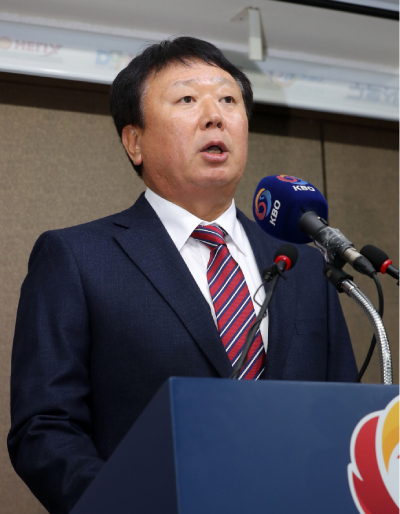 Korean national baseball team manager Sun Dong-yol announces his resignation at a press conference at the KBO headquarters in Seoul on Wednesday. [YONHAP]

“I think my time is up,” Sun told Yonhap News Agency on the phone.

Sun later held a press conference explaining his decision after meeting with Chung Un-chan, commissioner of the KBO.

Sun led Korea to its third straight gold medal at the Asian Games in Jakarta, but the team’s uninspiring performance fueled public anger.

“We returned home with a gold medal, but we couldn’t really celebrate,” Sun said in his statement to media. “I felt miserable as a national team manager since I couldn’t protect the players’ pride and honor. That’s when I made up my mind.”

After the Asian Games, a civic group filed a report with the Anti-Corruption and Civil Rights Commission, the state anti-corruption watchdog, alleging that Sun violated the anti-graft law by picking underperforming players. He was then summoned to a parliamentary audit session by lawmakers.

Critics said Sun chose some players just to help them get their exemptions from military service, since Korea, as the only fully professional team at the Asian Games, was virtually guaranteed to win the gold medal. Healthy Korean men are required to serve about two years in the military, but athletes who win an Asian Games gold medal are exempt from conscription.

Sun said he was also hurt by the parliamentary audit.

“At the parliamentary audit, a lawmaker said our victory (at the Asian Games) wasn’t really a difficult task and that comment also helped me to make my decision,” he said. “A manager has infinite responsibility and I’ve never tried to dodge that. But a manager’s authority on roster selection and game operation needs to be respected and should be independent.”

Sun added that sports and politics should be always separate and that that he hopes he is the last coach to be summoned to a parliamentary audit.

“I heard that it was the first time in sports history that a national team manager attended a parliamentary audit session as a witness,” he said. “Sports should not be consumed for political reasons and I hope my case is the last one.”

Sun apparently expressed disappointment in Chung, who made controversial remarks during a parliamentary audit. Chung then said he’s opposed to having a full-time manager for the national team and criticized Sun for scouting players by watching KBO games on television, instead of going to ballparks.

“Now I know what the commissioner thinks about full-time national team manager, and I hope me stepping down is consistent with his belief,” Sun said.

Sun, the former KBO MVP-winning pitcher, became Korea’s first full-time national team manager last July. He first managed Korea at the 2017 Asia Professional Baseball Championship (APBC) — a tournament also featuring Japan and Chinese Taipei that was open only to players under 24 — followed by the Asian Games in Indonesia this summer.

Sun said that he had intended to announce his decision earlier, but that he waited until the KBO championship series was over.

Korea’s next big event is the 2019 Premier 12, which will double as a qualifying event for the 2020 Tokyo Olympics. Sun was contracted until Tokyo 2020, should Korea qualify for the Olympic Games.