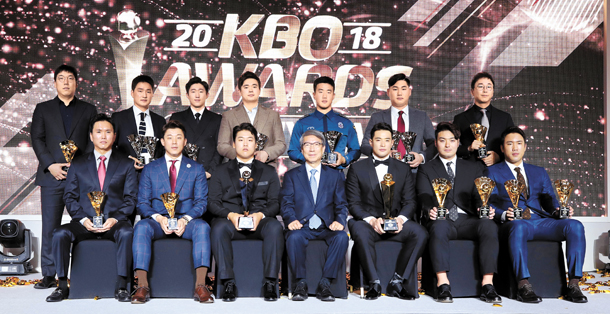 Some of the KBO’s award winners pose with their trophies after the end-of-season award ceremony in Seoul on Monday. [YONHAP]

The 2018 KBO end-of-year awards ceremony brought a thrilling season to a close on Monday.

To no one’s surprise, the best home run hitter in Korean baseball was crowned the league’s top player. Slugger Kim Jae-hwan of the Doosan Bears earned the MVP award for the 2018 KBO regular season. The outfielder collected 487 points out of a possible 888 points in a media vote.

The players earned points for top-five votes: the first-place vote was worth eight points, followed by four points for the second-place vote and so forth. Kim’s Doosan teammate, pitcher Josh Lindblom, finished second with 367 votes, followed by Park Byung-ho of the Nexen Heroes with 262 points.

In his eighth season, Kim played in 139 games and led all players with 44 home runs and 133 RBIs - both career highs. The 30-year-old also led the KBO with 346 total bases while ranking second in slugging percentage with .657 and on-base-plus-slugging (OPS) with 1.062.

Kim put up these big numbers despite playing his home games at Jamsil Stadium in Seoul, the biggest and least hitter-friendly ballpark in the KBO. After Park won back-to-back MVPs in 2012 and 2013, the KBO has now seen five different MVPs in five seasons.

Kim is the sixth Bear to win an MVP award and the third position player from the franchise after Kim Sang-ho in 1995 and Tyrone Woods in 1998. All three players were the home run leaders in their MVP seasons.

“I can’t think of anything to say, other than to thank everyone,” Kim said after receiving his award at a ceremony in Seoul. “I know the best way to repay my fans for their support is to keep doing the absolute best I can on and off the field.”

Kim’s MVP award this year is the peak of a career arc that included a failed doping test in 2011. He tested positive for a banned substance before the Baseball World Cup that year and was suspended for 10 games in the 2012 season.

“Everyone on the coaching staff and my teammates helped me so much along the way,” Kang said after receiving his trophy. “I am not going to be content with just winning this award. I want to become a player who can get better every season.”

This season, Kang was the dominant rookie in the league. He completed the regular season with a batting average of .290, 29 home runs, 84 RBIs and 108 runs. Kang also set the record for most home runs by a KBO rookie drafted out of high school. The previous record was set by Kim Jae-hyun in 1994, with 21 home runs. Kang’s first home run in the KBO was also the first home run by any player in the league in the 2018 season.

Kang was only one home run short of the all-time KBO rookie home run record, which Park Jae-hong achieved in 1996. Kim Hyun-soo of the LG Twins won the highest batting average award, at .362, while Jeon Jun-woo of the Lotte Giants and Park took home two titles. Jeon had the highest number of hits, at 190, and runs, at 118, while Park won the award for highest on-base percentage, at .457, and slugging average, at .718. Park Hae-min of the Samsung Lions had the most stolen bases with 36.

For the the pitching awards, the Bears’ Lindblom won best ERA with 2.88, while Seth Frankoff of the Bears picked up the most number of wins, at 18, and best winning percentage at .857. Keyvius Sampson of the Hanwha Eagles topped the league in strikeouts with 195. Oh Hyoun-taek of the Giants had the most holds with 25 and Jung Woo-ram of the Eagles had the most saves with 35.