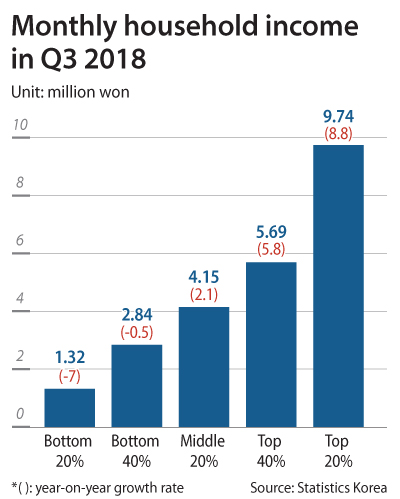 The income gap is now the widest in 11 years, raising doubts about the Moon Jae-in government’s income-led growth policy, a policy that was supposed to improve the livelihoods of lower-income households.

Laborers have been especially hard hit.

Korean monthly incomes on average grew 4.6 percent year on year to 4.75 million won. This is the greatest increase since the first quarter of 2014, when average household incomes grew 5 percent.

The biggest contributor to the rise was incomes generated by personal wealth, which grew 9.3 percent year on year. The category includes interest and gains from stock investments. Labor incomes grew 4.5 percent.

Incomes in the bottom 20 percent category have been falling since the beginning of the year. In the last three months of 2017, incomes grew 10.32 percent, but the trend turned quickly, with incomes falling 8 percent in the first quarter year on year and 7.6 percent in the second quarter.

The top 20 percent have been enjoying year-on-year income growth for 11 consecutive quarters since the first quarter of 2016.

More stark contrasts are evident if the categories are further broken down. Incomes earned from labor by the bottom 20 percent fell the most since the relevant data was first compiled in 2003.

Those in the bottom 20 percent category that were making their livings by running their own businesses experienced a 13.4 percent income drop to 216,000 won a month.

The situation was much the same for those in the bottom 40 percent. Average incomes in this group dipped 0.5 percent year on year to 2.84 million won a month. It was the third consecutive quarter of declining incomes for them.

Labor incomes in this category fell 3.2 percent from 1.67 million won a month a year ago to 1.61 million won this year.

In the top tier, labor incomes rose 11.3 percent. This group has been enjoying more than 10 percent year-on-year growth in each of the last three quarters.

The statistics agency blamed the shrinking of income of those in the bottom tier largely on the job losses that they have been facing, especially for those working in temporary and day-to-day jobs.

In the third quarter, the number of people working under contract fell 3.2 percent compared to a year ago to 4.91 million. Day-to-day hires, or those employed for less than a month, have fallen 4.4 percent to 1.45 million.

Those working contract jobs account for 33.6 percent of the bottom 20 percent, while day-to-day hires are nearly 17 percent of that group.

“In the case of people in the bottom 20 percent, those working in office jobs have shrunk from 8.2 percent to 5.1 percent compared to a year ago,” said Park Sang-young, head of Statistics Korea’s welfare statistics division. “This shows that the equality of jobs is getting worse.”

Due to the shrinking incomes in the lower income bracket, there is now less disposable income available for shopping.

The latest household income report is expected to increase controversy over the current administration’s income-led growth policy, which some argue has been hurting the people it is designed to help. The main goal of income-led growth was to raise the incomes of the poorer households and thus increase the amount of money available for spending, which in turn would boost economic growth and reduce the country’s dependence on exports.

President Moon Jae-in faced backlash earlier this year when, during a Blue House event, he said that the income situation was improving as the result of income-led growth policies.