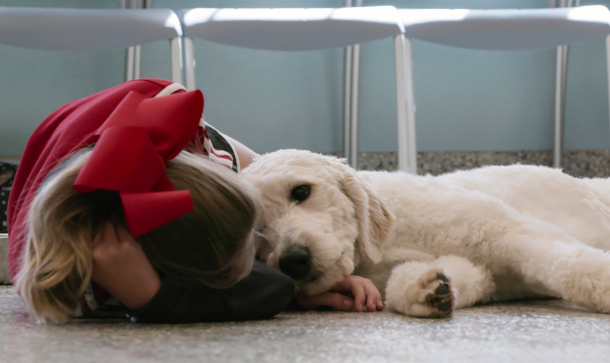 A scene from the Netflix Original documentary “Dogs.” [AP/YONHAP]

In these heated and oft-difficult times, do we need dogs more than ever?

Do we need to rescue them, let them run free, accept their precious help with our most trying physical challenges and revel in their licks and loving nudges?

“We’re in undeniably divisive times right now. We’re all searching for something that everyone can agree on and dogs are probably about as close to that as we get,” said Zipper, who executive produced the six-part project with Berg.

“My brother and I are on completely opposite sides of the political spectrum,” he explained, “but he’s got five dogs and I’ve got my dog, Anthony. We start talking about the dogs and start feeling the love again.”

The series is set around the globe, from suburban Cincinnati, Ohio, and the Lower East of Manhattan to Italy’s Lake Como region and the dangerous streets of Damascus in Syria. There are human heroes, to be sure, but it’s the howl of Zeus and the watchful diligence of Ice, the commitment of curly-haired Rory and the undying loyalty of Max that drive these stories.

The dogs themselves take you to the brink, serving to inspire and uniquely frame the nearly hour-long chunks of storytelling set in locations and around circumstances chosen with the help of a casting team, said Berg.

“We wanted to illustrate the connection between all cultures with dogs and humans, and the dog-human love story,” Berg said.

There’s plenty of love, and none of something in particular that’s more often than not a standard in dog film fare through time: death. I repeat - nobody dies. To heck with spoilers. No dog protagonists and no humans, either. That isn’t to say that tears won’t be shed, including by you if you’re truly human, and that people and dogs aren’t in danger, sick or depressed.