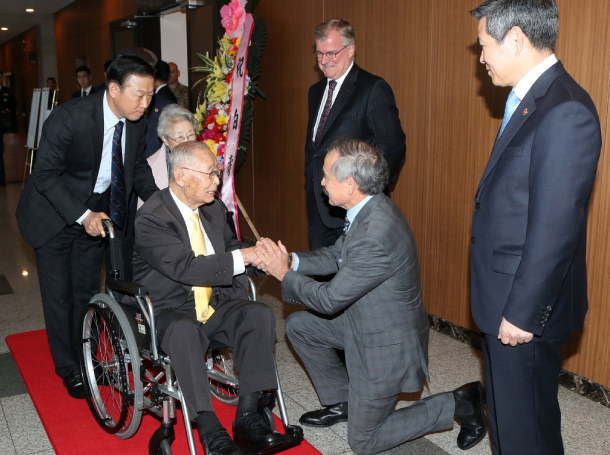 Gen. Paik Sun-yup, in a wheelchair, center, is congratulated on his 99th birthday on Wednesday by a kneeling U.S. Ambassador to Korea Harry Harris, second from right, at the Ministry of National Defense Convention Center in central Seoul. [BYUN SUN-GOO]

The U.S. Eighth Army held a surprise birthday party on Wednesday for General Paik Sun-yup, one of the most celebrated commanders of the 1950-53 Korean War.

The celebration of Paik’s 98th birthday -- or the celebrated 99th by Korean count -- was held at the Ministry of National Defense Convention Center in central Seoul with nearly the full roster of American representatives in Korea in attendance, including U.S. Ambassador to Korea Harry Harris and the new commander of the U.S. Forces Korea (USFK) Gen. Robert B. Abrams.

Defense Minister Jeong Kyeong-doo, Chairman of the Joint Chiefs of Staff Park Han-ki and Commander of the First ROK Army Park Jong-jin were also present to congratulate the general.

Jeong presented Paik with a ceremonial military baton inlaid with mother-of-pearl as a birthday gift. Crouching before Paik, who was in a wheelchair, Gen. Abrams handed him a booklet of congratulatory messages and photographs from all current and former commanders of the USFK.

“You are like the foundation of the U.S-Korea alliance,” Abrams told Paik.

The two men share a unique connection that goes back to the Korean War. Abram’s father was Creighton Williams Abrams, a U.S. Army general who fought in Korea alongside Paik.

Paik was taken aback with gratitude at the celebrations that day. He had originally been informed that the event would be a luncheon with Abrams, and was surprised when it turned out to be a banquet organized by his family and the U.S. Eighth Army, which is based in Korea.

Though relegated to a wheelchair since 2016 due to a frail leg, Gen. Paik remains healthy and vividly recalls the milestones of the Korean War. He is said to visit his office at the War Memorial of Korea every day.

A larger-than-life figure in the Korean military, Paik is best known for leading his troops to victory in the Battle of Tabu-dong, a critical moment in the defense of the Busan perimeter in Sept. 1950.

Having been pushed to the brink of destruction in the early months of the war, South Korean forces drew a last line of defense along the Nakdong River to fight back the advancing North Koreans.

Paik’s performance in that resistance was highly regarded by his American counterparts.

After being promoted to commander of the First Field Army then Army Chief of Staff for the rest of the war, Paik built a solid relationship with American commanders like Gen. Douglas MacArthur and Gen. Matthew Ridgeway.

After the war he had a diplomatic career as ambassador to the Republic of China, France and Canada, as well as in the bureaucracy as Minister of Transportation from 1969 to 1970.

He still enjoys immense prestige among the commanders of USFK, who appointed him an honorary Eighth Army commander in 2013. Every time a new commander is appointed to lead the USFK, it is customary that he first visit Paik to receive the old general’s blessings.