Slow start in ABL for Kim as Geelong loses

Slow start in ABL for Kim as Geelong loses

Despite the high expectations, Kim Jin-woo of Geelong-Korea had a disappointing debut in the Australian Baseball League (ABL) during a game against the Perth Heat on Saturday. Geelong-Korea lost the game 15-2. 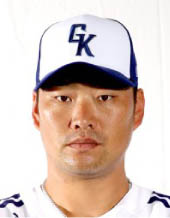 Kim appeared as Geelong-Korea’s starter but was taken off the mound only after one and two-thirds of an inning, after giving up seven hits, two walks and six runs.

Although Kim was expected to be one of the ace pitchers in the club’s starting rotation, he struggled to control his pitches. He got off to a slow start in the first inning, with the bases loaded after he gave up two walks and two hits.

After completing the first inning without giving up a run, Kim’s struggle continued in the second inning, as he quickly got the batters on first and the third bases. Kim managed to ground out the next batter but wasn’t able to complete another scoreless inning.

Kim gave up another two runs, and that was the end of the day for him.

Once Kim left the mound, Kwon Hwi came in as the pitcher, but gave up four more runs.

Geelong-Korea hoped to redeem their loss on Sunday, but once again failed as they lost another game to the Heat, this time 9-5.

With another loss, Geelong-Korea is off to a disappointing start in the ABL, ranking last in ABL Southwest with one win and seven losses as of Sunday.

Kim’s success came to a quick end as he struggled with minor injuries. He spent the entire 2018 season in the Futures League, and in October, he was released by the Tigers. Kim was among the 14 players to be cut from the club after the season. But rather than retire, Kim chose to continue his professional career in Australia.

The ABL is a semiprofessional league. This season, with the addition of Geelong-Korea and Auckland Tuatara, a team from New Zealand, a total of eight teams will be competing for the title.

Geelong-Korea is an all-Korean team led by manager Koo and general manger Park Choong-sik. After tryouts, Kim, Lee Jae-gon, formerly of the Lotte Giants, and Jang Jin-yong, formerly of the LG Twins, have made it on to the roster. Most recently, Choi Joon-suk, formerly of the NC Dinos, joined Geelong after getting released by the club.

The ABL regular season is three months long, and each team will play 40 games. Geelong-Korea continues its season with the Heats on Thursday.