After a self-imposed eight-month hiatus following the Olympics, Kim Bo-reum has returned to the world of professional speed skating and is already recording results that prove she’s put the Games behind her. 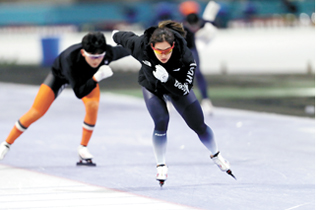 Kim was accused of bullying her teammate during the women’s team pursuit race at the 2018 PyeongChang Winter Olympics. The incident briefly made her public enemy number one in Korea as more than half a million people from the embarrassed host nation signed a contract on the Blue House website calling for her to be ejected from the national squad.

During the women’s team’s pursuit race, the women’s team, composed of Kim, Park Ji-woo and Noh Seon-yeong, showed poor teamwork that led Kim to receive criticism for her unsportsmanlike behavior.

The race seemed to go to as planned at the beginning. Kim led for three laps while Park and Noh each took the lead for a lap and a half.

But the group’s final lap is where it all went wrong: the team raced the final lap with Kim at the front followed by Park and Noh, but before reaching the finish line Noh had fallen far behind. As a result, Korea finished seventh in the quarterfinals with a time of 3 minutes and 03.76 seconds. After the lap, Kim appeared to blame Noh for the loss.

Although Kim won a silver medal in the women’s mass start race shortly after the incident, she didn’t get much love from the fans. Kim suffered from sociophobia and needed counseling.

The Ministry of Culture, Sports and Tourism ultimately cleared Kim of bullying her teammate Noh Seon-yeong, placing the blame on the team’s coach, Baek Chul-gi. While Kim may have made comments that implied it was Noh’s fault the team lost after the race, the ministry determined that Kim and Park Ji-woo made no intentional effort to leave her behind on the ice.

Despite the decision, Kim took an eight-month break as she struggled to come to terms with the mental pressure of the Games. Her appearance at the national team trial last month was a surprise. Many also doubted that her long absence would make it even more difficult for her to race like she did.

Kim returned to the track this month ready to prove that she had moved on from the incident. She hasn’t wasted much time in adjusting to the competition, and is already off to another great start at the International Skating Union (ISU) World Cup.

“When I just started training again, I was worried that my body wasn’t ready for an actual competition,” Kim said.

Despite Kim’s concerns, she didn’t need much time to adjusting back to the international stage. During the first leg of the ISU Speed Skating World Cup at Obihiro, Japan, on Nov. 17, Kim won a bronze medal in the women’s mass start by clocking 8 minutes and 58.530 seconds, earning 96 points.

Then, in the second leg of the World Cup in Tomakomai, Japan on Saturday, Kim won a gold medal in the women’s mass start with a time of 8 minutes and 52.180 seconds, earning 108 points.

“After the Olympics, I felt like I couldn’t wear the skates anymore,” Kim said. “I was able to return because the fans cheered for me throughout that time.”

Since the 2018 PyeongChang Winter Olympics, many of notable speed skaters have dropped out of competition. Two-time Olympic gold medalist Lee Sang-hwa postponed her retirement but chose not to compete in the ISU World Cup events this season and Lee Seung-hoon, who took the gold in the men’s mass start race in PyeongChang, gave up his spot on the national team as he chose to compete in the Netherlands’ league this season.

Mo Tae-bum, the 2010 Olympic gold medalist in the men’s 500 meter race, and Park Seung-hi, who switched from short track to speed skating, announced their retirement after the Games.

Not only that, the bullying incident in the women’s team at the Games and accusations of favoritism revolving around Lee Seung-hoon in the men’s team put a serious dent in the sport’s popularity in Korea. With Kim’s return, the popularity of speed skating is slowly starting to return.