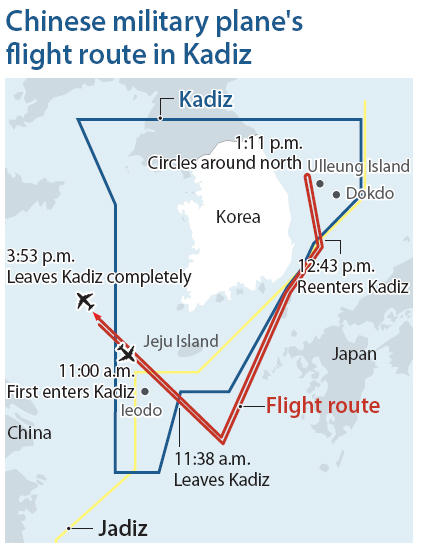 The Chinese military plane first entered the Kadiz northwest of Jeju Island at around 11 a.m., according to the Joint Chiefs of Staff. The plane initially flew out of the Kadiz about 40 minutes later toward Ieodo, an underwater reef controlled by Korea in waters that both Seoul and Beijing claim, and briefly entered Japan’s air defense identification zone (Jadiz).

The Chinese military plane appeared to be a Shaanxi Y-9JB electronic warfare and surveillance aircraft.

The plane entered the Kadiz from the southeast of Pohang in North Gyeongsang and then again near Ieodo. It then retraced its route and finally left the zone westward toward China at 3:53 p.m.

The hotline connects Korea’s Master Control and Reporting Center, or MCRC, to the air defense monitoring center of China’s Northern Theater Command. It is intended to prevent accidental clashes. A Korean military official said Tuesday that “This is the first time that China didn’t respond over the hotline on its unauthorized entry into the Kadiz.”

The Korean Air Force scrambled 10 fighter jets, including its F-15Ks and KF-1s, in response. Seoul’s Ministry of National Defense summoned Du Nong Yi, a military attache at the Chinese Embassy in Seoul, to lodge a protest over the entry. Likewise, the Korean Ministry of Foreign Affairs also summoned a Chinese Embassy official and expressed “regret” the same day and requested that such an incident “does not recur.”

Chinese military planes entered the Kadiz without notice 110 times between January and September of this year, according to data submitted by the Air Force to the National Assembly’s Defense Committee on Tuesday. This includes both cases of prolonged flight time within the Kadiz and brief entries. The number of entries increased 11 times over last year, when Chinese aircraft entered the Kadiz without notice 10 times.

It is an international practice to inform a country prior to entering its air defense identification zone (ADIZ). The Chinese military has ignored this custom, and on Monday, it avoided communication with Seoul, which can be interpreted as blatant disregard for the Kadiz. Experts view China’s continued entry into the ADIZ in the region as an assertion of its military power.

“China is tactically obtaining information on South Korea, the United States and Japan and confirming the three countries’ defense posture,” said Kim Hyung-cheol, a former deputy chief of staff of the Air Force. “China, after strategically claiming the Yellow Sea, is now trying to similarly place the Korean Peninsula and the East Sea within its backyard and have its influence recognized.”

China unilaterally proclaimed its own ADIZ in the East China Sea on Nov. 23, 2013. It overlaps with areas claimed by Korea and Japan.

“The Chinese Air Force, as it develops its capabilities, is expanding its scope of activities,” said Park Byung-kwang, a researcher with the Seoul-based Institute for National Security Strategy. “As it shifts its influence into the Korean Peninsula and East Sea, the crossroad to the Pacific Ocean, it is, at the same time, keeping Japan, its old enemy, in check.”

This marks the seventh time this year a Chinese military plane entered the Kadiz in a route passing near Ieodo, Jeju Island, Pohang and Ulleung Island. Chinese aircraft circled similar routes in January, February, April, July, August and October of this year.

Beijing defended the previous entries into the Kadiz as “training exercises” to Seoul.

“The Chinese Air Force’s trespassing the Kadiz has become regularized,” Kim said. “At this level, it appears that it is being carried out under the orders of a higher line of command than China’s Northern Theater Command, which oversees emergency situations on the Korean Peninsula.”