A footballing star is born

A footballing star is born 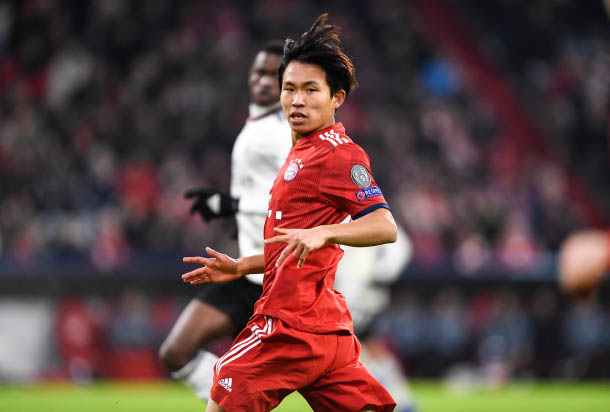 The next generation of Korean football superstars is continuing to rise through the ranks of leading European clubs.

Less than a month after 17-year-old Lee Kang-in made headlines when he debuted with Valencia CF, 19-year-old Jeong Woo-yeong took to the pitch for German Bundesliga club FC Bayern Munich on Tuesday.

During Munich’s UEFA Champions League Group E match against Benifica at Allianz Arena in Munich, Germany, Jeong, a midfielder, was substituted into the match in the 81st minute for Thomas Muller, becoming the youngest Korean to ever debut for the Bundesliga club.

Jeong was on the pitch for about 10 minutes. Munich won 5-1. With a win, Munich advanced to the round of 16 in the UEFA Champions League.

By competing in the match, Jeong became the youngest Korean player, at 19, to make his debut in the UEFA Champions League. Jeong is the ninth Korean to compete in the Champions League, and the only to do so before his 20th birthday.

Before Jeong, Son Heung-min of Tottenham Hotspur was the youngest player to play in the Champions League, at age 21 for Bayer Leverkusen in 2013.

Jeong, a graduate of Incheon Daegun High School, made headlines in Korea when he signing with Munich’s U-19 team in January. Jeong immediately made his presence known in Munich, scoring in his first game for the U-19 team.

The midfielder was promoted to Munich’s senior second division team in July, once again scoring in his debut match. In 16 matches with Munich’s B team, Jeong scored six goals and had three assists, good enough to make the step up to the club’s top team.

Jeong’s debut on Tuesday made headlines internationally, in part because of his dramatically fast rise through the ranks of the club. After the match, Munich posted three pictures of Jeong on social media and tweeted a greeting in Korean.

“A bit of history now for Bayern as Jeong Woo-yeong becomes the first South Korean player to ever play for Bayern,” Eurosport stated on Tuesday.

Although Jeong played for the prestigious K League youth club in Incheon, he wasn’t a notable player in Korea until his signing with Munich in January. As he shared the exact same name - although a different English spelling - as national team player Jung Woo-young of Al Sadd SC, he was an unknown player to Korean fans.

Since Jeong, along with Lee, is making waves in Europe at such a young age, he is now seen by many as a future leader of the national team.

Unlike Jeong, Lee first caught the public’s attention when he appeared on season three of the KBS TV program “Shooting Kid” in 2007. Lee was quickly forgotten after the show, and left to Spain to continue his career with Valencia’s youth team.

Although they lack experience, it is possible that Bento could call them up as he hopes to push the national team through a generational change.

Since veteran players like Ki Sung-yueng, Lee Chung-yong and Koo Ja-cheol are considering retirement from the national team after the Asian Cup, Bento has mentioned that he will try to give more opportunities to younger players, led by Son. The young players’ success in Europe has given Bento more options to join existing young stars like Na Sang-ho, Hwang In-beom and Lee Seung-woo.

Along with Lee, Jeong is expected to lead Korea’s youth team at the 2019 U-20 FIFA World Cup, Tokyo Olympics and the 2020 Qatar World Cup.