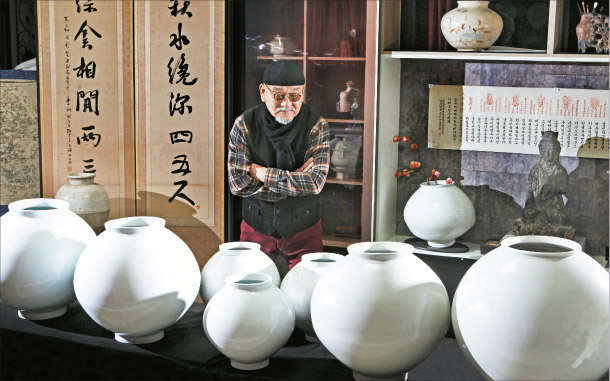 Hwang Kyu-wan, director of the Seokgyeong Antique Association, looks at moon jar pieces he created in his workshop in Uijeongbu, Gyeonggi. [PARK SANG-MOON]

The tradition of ceramic art travels back thousands of years to when people started burning clay in fire to create the most primitive forms of earthenware. Among the thousands of different styles that would have been created during that time, one type that embodies the Korean spirit the best is definitely the moon jar.

The moon jar, or the Joseon (1392-1910) Baekja Daeho as it was known, was first created between the late 17th century and early 18th century in the Gwangju region of Gyeonggi. Apart from its ivory white color, the Baekja Daeho was different from the other popular forms of ceramic from back then in that it was big - usually over 40 centimeters (1 foot, 3 inches) - and only had a single circular curve that made it look like a round moon; hence the name moon jar. With its pure colors and elegant form, the moon jar is enough to represent Korea and the Korean spirit on a global level.

Though the beauty of the ceramics is becoming more widely known, it wasn’t until 2005, when the National Palace Museum of Korea put on the “Baekja Moon Jar” exhibition as its opening exhibit, that people were made aware that such a beautiful object existed in our history. As of this year, there are only about 30 original moon jars left in the world.

Someone who has dedicated his life trying to spread the beauty of the moon jar is Hwang Kyu-wan, the director of the Seokgyeong Antique Association. Having spent 50 years in the traditional arts, he has a special affection for the moon jar, and as an old arts collector, he has ventured into creating his very own moon jars and even painting pictures of them.

Hwang had a very unique childhood. His uncle was the head of what would later become the Korean National Police Agency during the Syngman Rhee regime, and so he had many opportunities to interact with the then-president. According to Hwang, Rhee would practice his handwriting on the back of printed police schedules or on the back of letters he received. When Rhee threw away the papers after he was done, the young Hwang would collect them - making him the owner of many of Rhee’s autographs. Later, Hwang even held an exhibition of Rhee’s writings.

It was then that Hwang realized his affinity for collecting things. During middle school, he collected stamps. As he got older, he sought out old currency - he collected enough to buy two houses, says Hwang. He would often frequent antique shops located in Insa-dong, central Seoul, in search of treasures to add to his collection. And it was there that he developed a love for traditional arts, especially ceramics. 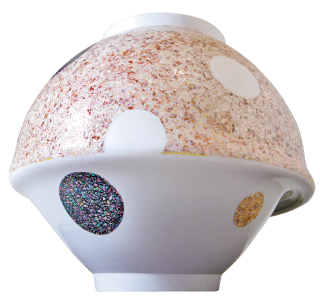 So he went around getting acquainted with experts in the field. The list of friends he made back then include: Sung Sam Park (also known as Sam Park), commonly referred to as the father of contemporary woodcraft; doctor Han Gi-taek; the late painter Chang Woo-soung; calligrapher Son Jae-hyung and scholar Lee Ga-won. Former directors of the National Museum of Korea Jeong Yang-mo and Choi Sun-woo also offered their knowledge to Hwang. He also formed the Korean Museum Association with artist Jo Ja-ryong.

Hwang is confident that no one has seen the Joseon Baekja Daeho moon jar as much as he has. He didn’t just look at the jars with his eyes, he feels it with all of his senses and gets close to it. It was in his 30s that he started making his own moon jar, going beyond just appreciating the beauty with his eyes. It wasn’t to start selling them or become famous, but purely from the joy and desire to give birth to a Joseon moon jar with his own hands.

However, it was difficult to create a moon jar that had the right proportions. So he passed on his knowledge to moon jar craftsman Shin Chul, and he went on to painting the ceramic pieces instead. He always had a habit of sketching and drawing ceramic pieces after he saw them in a museum, which made him surprisingly talented at painting moon jars too. In 2003, he held his first moon jar painting exhibition in Auch, France.

Hwang Kyu-wan has dedicated his life to spreading the beauty of the moon jar through many different medium, such as through his own paintings, left, and collaboration with other artists. Top right is a piece made with lacquerware master Kim Young-jun and above right, the Moon Jar dance with Nam Young-ho. [PARK SANG-MOON]

According to Hwang, the moon jar embodies the eight values of a good person, referred to as hyojechungsin yeuiyeomchi in Chinese characters - respecting one’s parents, loving one’s brothers, loyalty to the king, trust between friends, manners, justice, cleanliness and humility. Through the messages of the moon jar, he feels the teachings of Lao-tzu, who emphasized the importance of naturalism. As these are the values that all people should carry, he himself is always trying to become the moon jar himself.

To those studying art, Hwang recommends they go to the museum as often as possible and observe moon jars there. If one can fully express the elegant curves and balance found within the moon jar, then they will become masters of any kind of art Hwang believes. Each moon jar contains the curves of not only calligraphy, but all forms of art, existing in harmony. Hwang says it is important to draw them hundreds of times, not just look at them. The more you draw, the more an artist will see themselves develop over time.

He has spent his life devoted to the moon jar and getting people to love them just as much as he does. To ensure that people learn more about ceramics, he paints moon jars for everyone to see. He also gives birth to new forms of the moon jar through different mediums of art.

Hwang has long made efforts to find unique ways of bringing the moon jar into people’s lives not only on his own but through collaborations with other artists. He asked dancer Nam Young-ho to choreograph a performance about the beauty of the moon jar in France. With help from porcelain artisan Oh Joo-hyun, he’s trying to spread the beauty of Korean ceramics to the world. And his collaboration with craftsman Kim Young-jun, famous for his lacquerware works, gives a modern twist to the moon jar that’s never been seen before.