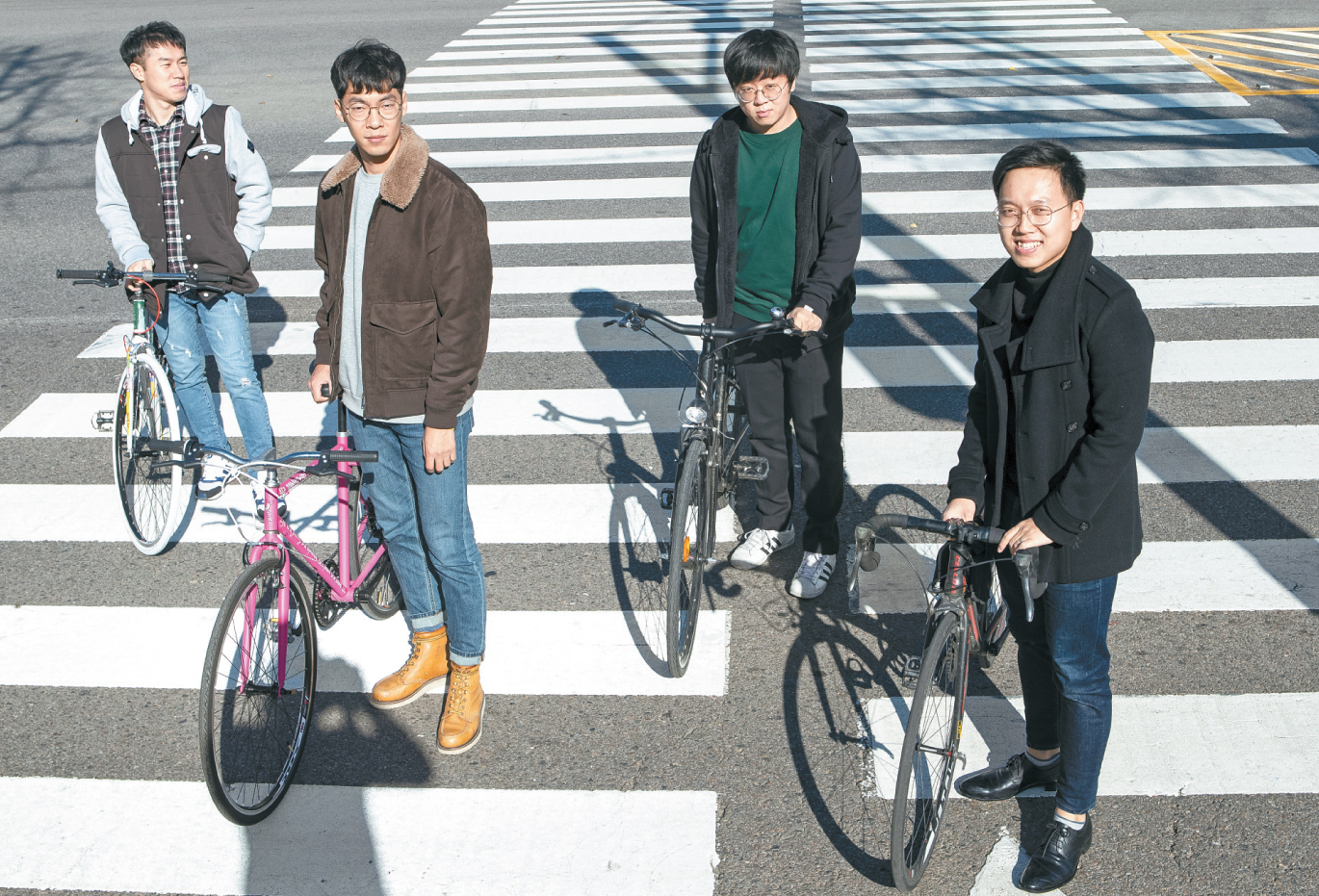 From left, Prom Bicycle employees Jeon Hae-su, Park Sang-hwan, Jeong Yeong-jun and Oh Yeong-yeol pose for a picture with their bicycles. The bicycles that Jeon and Park are holding were once broken and were repaired through Prom Bicycle’s recycling class. [KWON HYUK-JAE]

Prom Bicycle — a Suwon-based start-up — has a plan to make cycling part of daily life in Korea. It starts with putting some love into bicycles that have been neglected and abandoned.

CEO Oh Yeong-yeol; Jeong Yeong-jun, head of mechanical repairs; Park Sang-hwan, head of design; and Jeon Hae-su, manager of the Suwon Bicycle Lab, came together to create a business that repairs bicycles collected from the streets of Seoul and to organize long-distance rides. Prom Bicycle’s biggest project is its bicycle recycling class, a class geared towards collecting broken bicycles, fixing them and painting them with new designs.

“About 20,000 bicycles are thrown away every year in Seoul alone,” said Oh. “We decided to fix these bicycles and share them with others. After calling 25 district offices in Seoul to see if they could give us any broken bicycles, the Seodaemun District Office told us that we could take 100 that they were keeping in a storage unit.”

Prom Bicycle now has a contract with the Eunpyeong District Office in northern Seoul to collect all broken bicycles in the district. All the bicycles they collect are returned to the district office, while some of them are used by Prom Bicycle for use in their recycling classes. The classes are typically filled with middle and high school students who live in Eunpyeong District or in Suwon, Gyeonggi. After each student finishes the seven-week curriculum, they get to take their newly-revived bicycle home. The class also teaches students how they can fix their bicycles if a problem occurs. Last year, a total of 300 bicycles were recycled through the class.

“Our business is directly connected to cultivating a healthy and safe cycling culture,” said manager Jeon Hae-su. “Being emotionally attached to your bicycle is the start for any safe riding experience.” Apart from the recycling class, the business also provides safety classes that focus on educating students about bicycle safety tips, such as differentiating different traffic signals. The classes come from the group’s firm belief that the number of cyclists would increase if cycling were perceived as a safe method of transportation.

The idea for this business came to Oh in 2014, when he participated in randonneuring, a long distance-cycling sport that first started in France. Korea’s first randonneuring competition came to the country in 2010.

“The [randonneuring competition that I participated in] required participants to finish a 600-kilometer (373-mile) course in 40 hours. Each participant receives equal recognition if they finish the course in less than 40 hours. The race does not pit you against others, but rather it forces you to challenge yourself. I wanted to share that experience,” said Oh.

The 100-kilometer project was born out of this experience. He went on to create 100-kilometer cycling courses from Seoul to Chuncheon and Yangpyeong to Incheon. After the courses were established, he designed a four-week training program that would help people train for the ride and took to social media to recruit participants for the training. The positive reactions he received went well beyond his expectations. From May 2014 to March 2016, a total of about 500 people participated in his program. “[From then on], I decided to create a business out of doing what I loved doing,” said Oh. His dream was supported by school friends and his cycling club.

The bicycle repair class started in 2017 when someone confided to Oh that they wanted to participate in the 100-kilometer ride, but did not have a bicycle. The business also focuses on philanthropic ventures that can benefit society. It organized donation rides where all proceeds made from the event were given to help “comfort women,” or victims of Japan’s wartime sexual slavery during World War II. Prom Bicycle also organized a free bicycle repair service in Suwon. “Our service was well received by the residents of Suwon. We fixed about 80 bicycles during four hours,” said Oh. “Next year, we are planning to organize the same event in Seoul.”

Oh competed in the 2018 Better Together Challenge, a culture design competition sponsored by organizations like the World Culture Open. He was rewarded with the opportunity to participate in the Salzburg, Austria, Global Forum for Young Cultural Innovators.

“Around 50 cultural innovators from the United States, Argentina, Kenya and the Philippines got together to introduce new cultural ideas and exchange opinions about [what we could do] to change the society we live in,” said Oh. “It was interesting to listen to all the different suggestions that came up, like a bookstore owner proposing that [we] create animations that would bring comfort to visitors.”