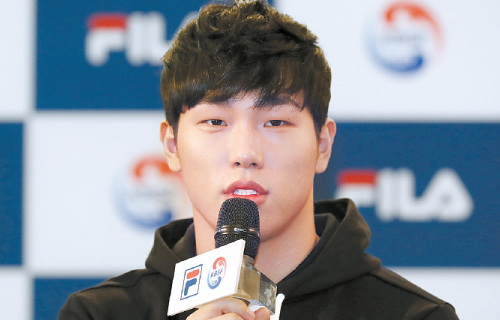 Reigning Olympic skeleton champion Yun Sung-bin said Friday that his goal for next year is to win a world championship.

“This year, my goal was to win gold at the Olympics, and I did it,” Yun said at a sponsorship event in Bucheon, west of Seoul. “With my experience at the PyeongChang Olympics, now I know how to prepare for the big tournament.”

The 2019 International Bobsleigh & Skeleton Federation (IBSF) World Championships will be held in Whistler, Canada, from Feb. 25 to March 10.

Yun has not been able to train well since the PyeongChang Olympics as the Olympic Sliding Centre in Pyeongchang, Gangwon, was closed due to management issues. However, he is off to a good start for this 2018-19 season, collecting bronze medals in the first two IBSF World Cups.

“I’ve completed only two of the eight World Cups this season, and I won two bronze medals, which is not a bad start,” he said. “I think my competitors really prepared hard.”

Yun, who won the silver at the 2016 Worlds in Austria, said he is confident about winning gold at the upcoming championship.

“I have lots of experience riding the tracks in Whistler,” he said.

Lee Yong, head coach of the Korean skeleton team, said he believes Yun will perform well, but that winning the gold will not be easy.

“Because of the difficult training environment, we were not able to prepare well for the Worlds, so it’s not going to be easy,” he said. “Russian sliders are also performing well. But since Yun has a good record in Whistler, I hope he can earn good results.”