Lee Jung-hoo of the Heroes poses for a photo at Gocheok Sky Dome, western Seoul, on Dec. 20. [OH JONG-TAEK]

Even before Lee Jung-hoo of the Heroes made his KBO debut, he was already well-known among baseball fans as the son of coach and former player Lee Jong-beom. Just two years later, the younger Lee has definitely stepped out of his father’s shadow to make a name for himself. 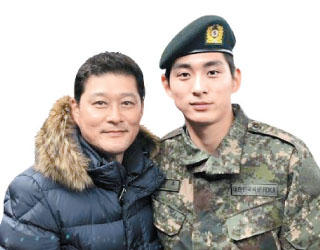 After debuting in 2017, Lee quickly made it clear he was more than just his father’s son by rising through the ranks to take the league’s Rookie of the Year award. Although Lee hasn’t exceeded his father’s success - the elder Lee won six golden glove awards, the batting title, KBO MVP and Korean Series MVP - in his second season, Lee has once again fulfilled the high expectations and found his spot in the Heroes’ batting lineup.

Just two years after turning pro, Lee was picked for the Korean national baseball team and took the gold at the 2018 Asian Games. At the Asian Games, the Lees became the first father-son duo to win the gold at the Asiad in the sport, competing as a player and base running coach. Not only that, Lee got to experience the KBO’s postseason with the Heroes and to finish off the season, he won a Golden Glove award.

Despite a successful season statistically, Lee didn’t have the best season physically. He had to miss the spring training camp before the season due to a finger injury and he went on to miss some games due to shoulder and calf injuries.

Q. The last time fans saw you was during Game 2 of the KBO playoffs against the Hanwha Eagles, where you injured your shoulder. How have you been since then?

A. I had shoulder surgery on [Nov.] 7 and have been recovering. During this time, I went to the army training camp in Nonsan, South Chungcheong, to complete my four weeks of basic training. I got back on the 14. Since I was rehabilitating my shoulder, I was worried about going to the training camp. I wore the brace whenever we were given a break and kept my shoulder still so I didn’t have any problems.

You won the Golden Glove award while you were at the training camp. How did you feel?

At first, [Kim] Ha-seong told me and I thought he was lying. Our platoon leader called me up separately and told me about me. When he told me, I asked him back, “me?” because I didn’t imagine that I would win the Golden Glove award. I am thankful to have won the award despite my lack of ability. Next year, I want to play better and win the award more confidently.

At the beginning of the season, you weren’t able to attend spring training due to a finger injury and while in season, you suffered from injuries. What happened?

My season started and ended with injuries. I was relegated to the Futures League team during the season due to an injury and I learned a lot from the players there. They played harder and had more passion in baseball than I did. I was motivated by them.

Your shoulder injury during the playoff game looked very serious. Did you feel that in the moment?

As soon as I caught the ball, I knew my shoulder was dislocated - and right at that moment, I felt that my season was done. Since I’ve injured my shoulder once during the season, I should have been more careful. But my body just instinctively responded. Since I wasn’t batting well, I wanted to be good in defense. On a scale of one to 10 in terms of pain, it was a 10. But to prove that it was an out, I raised my arm and showed the ball.

When you got your shoulder examined, you asked your trainer to hear the diagnosis instead of you hearing it yourself. Was there a special reason for that?

It was for psychological reasons. When I first hurt my shoulder, it didn’t hurt much. But after I heard the diagnosis, I instantly felt the pain. Since my doctor gave me a very realistically objective diagnosis, I started to get more worried and be more careful with my body. On the other side, my trainer tells me that it’s not a big problem and talks positively; it doesn’t ruin my psychological state of mind. From now on, I’m going to try not to hear the results from the doctor.

You didn’t have a sophomore jinx during your second season in the KBO. What worked well for you this season?

I was batting really well this year. Up until high school, I was a shortstop and switched to an outfielder after I turned pro. I think even my defense has gotten a lot better. Last season, I had a hard time determining the landing point of a hit, but this year I predicted it and ran. I watched a lot of clips on outfield defense and practiced a lot. Also, Song Ji-man, the former coach, and [Lim] Byeong-wook helped a lot. I was able to be more aggressive with my play after coach Song said to me, “if you make a mistake, I’ll take the responsibility.”

This year, you are better known by your name than as Lee Jong-beom’s son. How do you feel about that?

You got your military service out of the way. Are you thinking about playing in a foreign league?

I’m not sure yet. I’m not thinking about it at all. For now, my biggest wish is to fully recover my left shoulder. Then I want to play in more games next year than I did this year. Since I thankfully resolved my military service issue, I just need to be good at baseball. Once I retire, the fans will evaluate when I was at my best, so I’ll keep on working hard.

Have you gained confidence since playing in the postseason?

Since we didn’t play in the postseason last year, I didn’t know how it felt. But by playing postseason games this year, I started to think that our team can win too. So next year, my goal is to win.