Adora Anae of Hwaseong IBK Altos may have been the last player to get drafted in the foreign player draft in the V-League, but once the season started she quickly turned out to be the best player in the league. 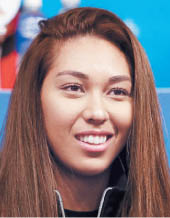 Still a college student when she attended the V-league foreign player tryouts in Monza, Italy, in May, Anae wasn’t a well-known name that any of the head coaches were looking out for. Although the Altos finished as runner-up last season, they were last in the drafting order after selecting last place in the order lottery.

By the time the Altos got a shot at the draft, head coach Lee Jung-chul was forced to request a timeout as all the players he had in mind were long gone.

As a result, the Altos had to settle for Anae.

Although Anae had a great college career as outside hitter at the University of Utah, drafting her was still a risk as she was new to the professional world. During her time with Utah, Anae was the all-time leader in kills.

At the time, Lee was concerned.

“Since she’s starting her professional career in Korea, I’m worried if she’ll be able to adjust to it,” Lee said. “But she has potential.”

The Altos took a big risk, but once the season started, it turned out to be a success. As of Thursday, Anae leads the V-League in scoring at 443. Anae is the only player in the women’s league this season to have scored more than 400 points.

During the Altos’ recent game against Suwon Kepco Vixtorm on Tuesday, Anae scored the highest points, at 25, to lead the Altos to a 3-0 sweep. With a win, the Altos are now the leader at 11 wins and five losses, totaling 32 points.

Although Anae heard about the tough training system in Korea, she didn’t show much concern as she was confident that she’d get through it all just fine. But the reality was more extreme than she expected.

The intense training brought Anae to tears on more than one occasion, and she came very close to quitting.

“She is the toughest foreign player I’ve ever met,” Lee said.

But Lee didn’t give up on Anae. Since the foreign player draft was first introduced in 2015, Lee has shown talent in developing foreign players. In the 2015-16 season, Liz McMahon won the regular season MVP and after the Altos won the championship in the 2016-17 season, Madison Kingdon won MVP.

More than Anae’s performance, manager Lee’s biggest concern is home sickness. Home sickness has been a concern for all the managers in the league, as a lack of technicality can be fixed through training, but home sickness can only be solved if a player goes back home. Due to this, the club invited Anae’s family members over.

At the season opener, Anae’s boyfriend visited. At the beginning of the season, her mother and her aunt’s family visited, and recently, her father visited Korea to cheer for her.

Although Anae still has a hard time adjusting to the training, she believes that the tough schedule has helped her improve. As she was the last player to get a spot in the V-League, Anae’s only goal is to be successful here.