Son Heung-min has scored another double for Tottenham Hotspur as he continues his run this month. 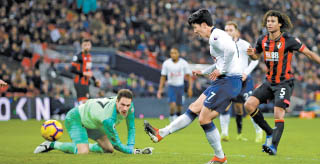 Son Heung-min of Tottenham Hotspur, center, scores a goal during an EPL match against Bournemouth at Wembley Stadium in London on Wednesday. [AP/YONHAP]

Son grabbed a brace in Tottenham’s 5-0 win over Bournemouth in their English Premier League (EPL) match at Wembley Stadium in London on Wednesday, local time. With Tottenham leading 1-0, he found the net with his right foot in the 23rd minute following a pass from Kyle Walker-Peters. The 26-year-old then rounded off the scoring for Tottenham in the 70th with his close range effort.

Son now has 10 goals this season, which include his three goals at the Carabao Cup.

Son missed the early part of the season due to the 18th Asian Games in Indonesia, where he helped Korea win the gold medal. While there were concerns of him having little energy to help Tottenham because of his international duties, Son has proved his attacking prowess again.

This is the first time that Son’s season goal tally has reached 10 goals in December since he joined Tottenham in 2015. In the last two seasons, Son’s 10th goal of the season came in January, while in his EPL debut season, the Korean had eight goals across all competitions.

Son is also on a three-game scoring streak. After scoring a goal against Arsenal at the Carabao Cup on Dec. 19, he netted twice against Everton in an EPL match on Sunday prior to his performance against Bournemouth.

With his recent performances, Son is getting closer to earning his third EPL Player of the Month award. He scored seven goals in December alone, with six coming from EPL matches.

Against Bournemouth, Son started as a left winger with Harry Kane playing up front as a striker. Tottenham’s first goal came from Christian Eriksen in the 16th, and Son doubled the lead seven minutes later. Walker-Peters intercepted the ball from Charlie Daniels’ poor ball control and gave it to Son, who fired a right-footed strike just outside the box to score.

Tottenham later punished Bournemouth with Lucas Moura’s goal in the 35th and Kane’s goal in the 61st. Son scored his second goal of the match in the 70th. Moura’s attempt was saved by Bournemouth goalkeeper Asmir Begovic, but Son took the rebound and tapped it into the net.