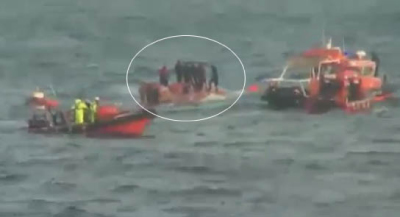 Three people died and two are still missing after a fishing boat collided with a cargo ship in the seas off of Tongyeong, South Gyeongsang, on Friday.

The 9.7-ton fishing boat had about 14 people on board when it hit the 3,000-ton Panamanian-registered cargo ship off Yokji Island in Tongyeong.

The remaining nine people were safely rescued and were immediately transported to Yeosu, South Jeolla, the Tongyeong Coast Guard said.

The accident was reported to the Tongyeong Coast Guard at 4:50 a.m. when a cargo ship said it heard a “huge bang” that sounded like a collision.

According to the coast guard, the 57-year-old captain of the boat, surnamed Choi, along with two other crew members, was found unconscious and died while being transferred to a hospital in Yeosu.

The coast guard reported in a briefing at 11:30 a.m. on Friday that they are still looking for the whereabouts of the missing two people who were on the boat.

The Coast Guard is also investigating the cause of death of the three people.

They reported that they likely died because those that died, along with the two other crew members who are currently missing, were not wearing life jackets.

A crew member surnamed Kim told the Yonhap news agency that “the accident took place during the night, and everyone in the cabin was sleeping.”

“First there was a loud noise that sounded like something was colliding with our boat,” he said.

“As soon as somebody yelled to put on life jackets, the boat tipped over. There was really little time to pull ourselves together.”

The nine crew members who were saved were examined at Yeosu Jeonnam Hospital and were reported to have no health issues, according to the police.