Nobody has heard of Korea’s top wrestler

Nobody has heard of Korea’s top wrestler 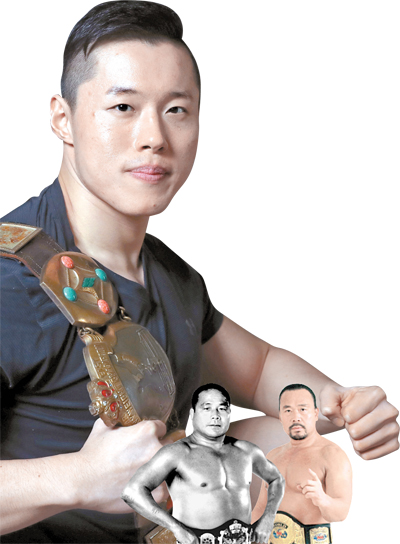 From left: Kim Min-ho poses for a photo at a gym in Pyeongtaek, Gyeonggi, on Jan. 9. Photos of former heavyweight champions Kim Il and Lee Wang-pyo. [KANG JUNG-HYUN]

The days when Korean wrestling superstars like Kim Il and Lee Wang-pyo were household names have long passed, and today’s young contenders are left pursuing their careers in relative obscurity. Wrestler Kim Min-ho is determined to return the sport to its former glory, one fight at a time. 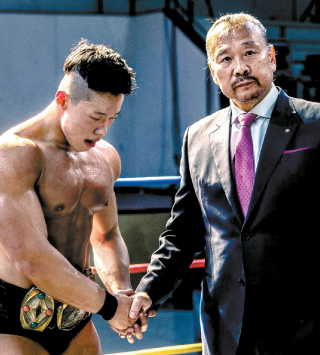 A photo of Kim Min-ho, left, and Lee Wang-pyo, after Kim won the heavyweight title in May 2018. [JANG TAE-HYUN]

Standing at 1.84 meters (6 feet) tall and weighing 105 kilograms (231 pounds), Kim is an imposing figure, whether in the red corner or the blue. He first encountered wrestling in the 1990s when he was in elementary school after watching a match between Hulk Hogan and Andre the Giant. Kim traveled around Korea to watch all of the World Wrestling Association (WWA) matches, led by Lee Wang-pyo.

“I slept at jjimjilbang [Korea sauna] by myself and traveled around to watch the matches,” Kim said. “I knew pro wrestling was scripted entertainment, but watching them getting their teeth broken and bleed, I knew that was ‘real’ martial arts. I told myself that I have to be a wrestler.”

Kim sought advice from professional wrestlers at the time, but was told to come back when he turned 20. Kim taught himself taekwondo, judo and ssireum, a traditional form of Korean wrestling.

When Kim graduated high school in February 2006, he visited the gym where his hero Lee Wang-pyo trained. Lee declined Kim’s request to coach him as he was too big - at the time, Kim weighed 140 kilograms.

As Lee told Kim that he wouldn’t accept him as his student until he lost weight, Kim did just that in less than six months. Through his hard work, Kim finally became one of Lee’s students and was taught by such notable wrestlers as No Ji-sim, Hong Sang-jin and Ahn Sung-ki.

Although most of the moves performed in a match are scripted, the training Kim went through to become a wrestler was tough. His daily training included 1,000 squats, 300 push-ups and 500 abdominal exercises, in addition to bridge and rolls.

But that was only the beginning. As he continued to train, the level of intensity increased and weight training and sparring were also added to his training regimen.

“A lot of my friends visited the gym thinking that it wouldn’t be that difficult because it’s just a show, but they all quit after less than a month,” Kim said. “So I was the only one who stayed in the end. I only had one day off a week, on a Sunday, but I had a part-time job that day.”

During the ’60s, wrestling was one of the most popular sports in Korea. Fans went crazy as Kim Il head-butted wrestlers from all around world. Even though the sport is scripted, the popularity didn’t die down for decades.

But by the time Kim Min-ho made his debut, those names had almost been forgotten.

“At the most recent professional wrestling match, there were about 900 fans,” said Kim. “That’s considered a lot.”

In Korea, there are about three to five matches a year, but wrestlers receive very little fight money - barely enough to cover transportation. In the United States and Japan, wrestling is still considered a popular sport, but in Korea professional matches are not even broadcast on TV.

As such, Korean professional wrestlers are forced to work other jobs. The Korean movie “The Foul King,” in which the main character works as a banker by day and a wrestler by night, was more like a documentary for Kim, who has multiple jobs to support his living.

“I work as a mortgage adviser at a secondary financial firm,” Kim said. “Since I’m in sales, I don’t have to show up to work every day. Thanks to the help from the company, I can balance work and wrestling.”

In May 2018, 10 years after his debut, Kim defeated his friend Jo Kyung-ho to win the WWA Korea heavyweight title, the belt which Kim’s coach No Ji-sim turned in. With the victory, Kim became Korea’s fourth heavyweight champion. Lee Wang-pyo, who was WWA Korea President at the time, awarded the title belt to Kim.

“It’s a belt that Kim Il won in 1963,” Kim said. “It was even more meaningful because it was the result of facing my friend Jo Kyung-ho, who I went through a hard time with. After the match, President Lee Wang-pyo rewarded the belt and it just felt like a dream.”

Despite the achievement, Kim still hasn’t been able to play his title match for over eight months.

Since Lee Wang-pyo’s passing from cancer in September 2018, Korea’s professional wrestling has been unorganized. Pre-scheduled matches were all canceled and the gyms in which the wrestlers train have been sold.

“It’s professional wrestling’s homework to continue the traditions of the sport while keeping the entertainment alive,” Kim said. “We’re thinking of ways to reach out to new fans, centered on our new president Hong Sang-jin.”